Assassin’s Creed Rogue is a 2014 historical fiction action-adventure open world stealth video game developed by Ubisoft Sofia and published by Ubisoft. It is the seventh major installment in the Assassin’s Creed series, and acts as a sequel to 2013’s Assassin’s Creed IV: Black Flag and a prequel to 2012’s Assassin’s Creed III with its final mission being the prologue to 2014’s Assassin’s Creed Unity. The game was first released on the Playstation 3 and Xbox 360 in November and December 2014, and will later be made available on Microsoft Windows on March 10, 2015. The story is set in the mid-18th century during the Seven Years’ War, and follows Shay Patrick Cormac, an Assassin-turned-Templar. Gameplay in Rogue is very similar to that of Black Flag with a mixture of ship-based naval exploration and third-person land-based exploration with some new features. Wikipedia® 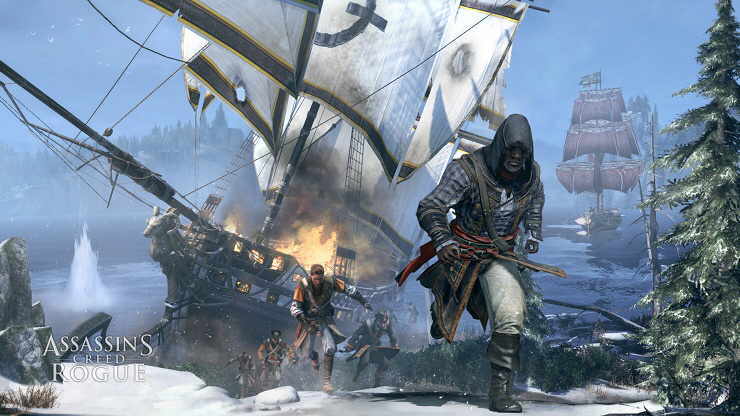 18th century, North America. Amidst the chaos and violence of the French and Indian War, Shay Patrick Cormac, a fearless young member of the Assassin Brotherhood, undergoes a dark transformation that will forever shape the future of the American colonies. After a dangerous mission gone tragically wrong, Shay turns his back on the Assassins who, in response, attempt to end his life. Cast aside by those he once called brothers, Shay sets out on a mission to wipe out all who turned against him and ultimately become the most feared Assassin hunter in history. Introducing Assassin’s Creed: Rogue, the darkest chapter in the Assassin’s Creed franchise yet. As Shay, you will experience the slow transformation from Assassin to Assassin Hunter. Follow your own creed and set off on an extraordinary journey through New York City, the wild river valley, and far away to the icy cold waters of the North Atlantic in pursuit of your ultimate goal to bring down the Assassins.