With emotion and texture at the center of her songwriting there’s reason A K U A’s music has been so warmly received by the few that have happened upon it: it’s real and it’s raw. Having already sparked musical comparisons to Rhye and Jessie Ware, and having opened for Katy B, Solange and Cody ChesnuTT, it’s safe to say that A K U A’s career as a solo artist is off to a promising start.
While her introduction to live music began as a timid backup singer during college, deep down, A K U A had her heart set on a solo project from the moment she stepped on stage. Yet it would take hours of tinkering alone in her bedroom and a brief (but weird) stint singing at a luxury Middle Eastern hotel-bar for A K U A to overcome her self-doubt and hash-out the unique sound she’s come to possess. Deciding early on to defy the conventional mold of “singer-songwriter,” A K U A took an interest in music production right away and took to working with production software, loop pedals and vocal effects to curate her sound. What emerged from this musical exploration was a variety of raw and deeply personal songs and soundscapes which A K U A would further develop with the help of producers & multi-instrumentalists Andy Bauer (of Twin Shadow) & Martin Rodriguez. 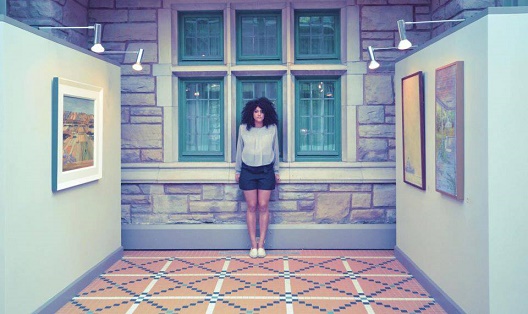