You may not have heard of the young Australian group Young Maverick before — which is understandable — but you’re going to want to get familiar with the name now. Originating from Melbourne, Australia (a place we’ve seen a lot of talent rise through recently), Young Maverick have been generating some well-deserved attention for their flowery indie-pop the past couple of years, but as we unfortunately found out, it only spreads across a few singles. Hopefully however, this latest single will entice the band to write some more. The band is self-described as “indie” and “holiday-pop,” with their new release certainly living up to the description. Their sound is very catchy and ends up sounding exactly like a hybrid of The Smiths and Phoenix. The guitar riffs are enticing while the vocals deliver that perfect pop feel you can’t help but associate with summer.

The new EP will be called ‘Holiday Popular’ and here’s what bass player Dave has to say on what you can expect: “Holiday Popular definitely shows a lot of progression from the 1st EP, but still has that classic Young Mav flavour. I think the key word is depth, or maybe wetness, nah depth is probably the word. Everything we have learned from all our previous recordings has influenced this EP making it sound overall better than ever. Young Maverick has reached maturity! (Might have to change our name to Prime Mav or Optimized Maverick.) Anyway recording it was super fun and it is sounding strong, hope everyone enjoys it!” 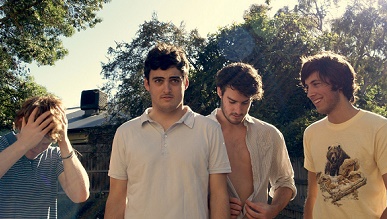