Skip to content
Home » Music » Whitney Wright – Half On A Heart

Whitney Wright was actually named after the late Whitney Houston, who many say can hear the same emotion and power in Whitney’s voice as once displayed by Whitney Houston. The story behind Whitney discovering her gift is special. While in junior high, Whitney was interested in joining the band but her mother encouraged her to join choir. Soon after joining choir she realized what a beautiful gift of singing she had. Whitney went on to graduate from The High School for Performing and Visual Arts in Houston, Texas. Attending the same school where musical legends Beyonce, Yolanda Adams, and Grammy award winning producer Bryan Michael-Cox, Whitney has the tenacity and the take-charge spirit to become successful in the new school of popular music.

Whitney Wright – Half On A Heart

Like so many big voices that have come from Texas, Whitney is no exception. In 2012, she won multiple singing and talent competitions including East Texas Idol and East Texas Got Talent. When Whitney was not wooing judges of singing competitions with her voice she was the lead singer for her band Studio 234 aka Thomas & Hall. Studio 234 would put on dozens of shows around East Texas playing favorite cover songs along with their own originally recorded music. Immediately following her victories in the competitions, Whitney went back to focusing on her university coursework. Being able to manage both her passion for singing and school, Whitney went on to earn a bachelor’s degree from Stephen F. Austin State University in May 2013 in social work. She is currently a graduate student at SFASU looking to attain her masters degree. Her message is that everyone is the star of their own show, and nothing is impossible for a star. She hopes to be a positive example for people, inspiring and motivating others to step up and take hold of their dreams no matter the obstacles. With her charismatic personality and powerful voice, Whitney Wright is sure to become a household name. Whitney’s debut EP, set for release on March 9th, 2014 was produced by Grammy Nominated producer Andrew Scott. A powerful, fun, and smooth collection, the EP merges R&B spirit with pop soul showcasing her dynamic voice.

Whitney Wright – Half On A Heart Lyrics: 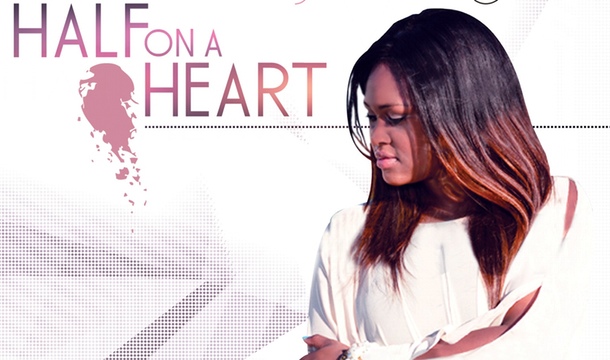