Skip to content
Home » Music » Watsky – Dent in the Moon

George Watsky is a rapper, writer and performer from San Francisco now living in Los Angeles. A versatile lyricist who switches between silly and serious, technically complex and simply heartfelt, George won the Youth Speaks Grand Slam Finals and the Brave New Voices National Poetry Slam in 2006. Immediate after, George appeared on the final season of “Russell Simmons Presents Def Poetry” on HBO in 2007 while himself a college Freshman and subsequently performed at over 150 universities across the country. Rapping all the while under the name ‘Watsky,’ George released a jazz-hip hop record with his band Invisible Inc in 2007 and the self-titled ‘Watsky’ in 2010, which peaked at #7 on the iTunes hip hop charts. In January 2011 George’s fast rapping went viral and led to two appearances on the Ellen Show, a slot on Last Call with Carson Daly, and an exploding online profile. George has performed at the Just for Laughs festival in Montreal, the NAACP Image Awards on FOX, three times at the Kennedy Center in Washington, DC, and has been featured in XXL, Billboard Magazine, and the New York Times Magazine.

Watsky – Dent in the Moon

Watsky – Dent in the Moon Lyrics:
Chorus
Swing, out of your shoes
And if you should lose this time
Keep on swinging and swinging and soon
When you connect
Look up and you might see a dent in the moon

Verse 1
Yeah, you see them craters?
That was cause a kid said there’d be none greater
In ten years Hammering Hank was at the plate launching balls into space saying see ya later
skinny as a toothpick but he got a nack
watch him swing a broomstick at a bottlecap
watch him rinse and repeat til he’s on the map
going from the cheap seats to the autographs
Papa put a bat in my hand and all he said was never ever rock a Dodger hat
And whether you win or you didn’t you gotta be getting dirty and we better send your jersey to the laundromat
it was in the cards
I knew someday I’d be a big league star
playing second base for the giants wearing number 9 rocking knee-high socks if I just worked hard

Verse 2
We had our 6th grade baseball tryouts on the basketball courts so the fastball– had hops
we didn’t have a grass field and so coach hit us grounders off the asphalt– I dropped
a lot and so he hit em faster and I took em off my ankles yelling that’s all, you got?
and when i saw my name on the roster i went insane like I was sniffing bath salts, i’m not-
here to play soft
I’ll go beastmode on a piñata and bite it’s motherfucking face off
until it rains candy out of it’s neck-hole
I didn’t go flexing my pecs, or get swole
wasn’t the fastest
And when I moved it kinda looked like I was running through molasses — true
it’s silly to give a shit about a game but earth is a little ball that’s just spinning on its axis — too

Verse 3
i wasn’t cut out for the bigs, guess i been a fool
and middle school was just a bit of cruel ridicule
but when you step into the ranks of the man it’s like they push you from the high dive to a kiddie pool (thanks)
Time to ballroom waltz that plank
We’re little minnows in a small shark tank
You try to swim without getting blood in the water, but you’re all heart and guts like a ballpark frank
Never an all star
I had to keep score
If I were perfect I would quit and join peace corp
I’m not a hero, if I didn’t try my doubts eat at me like I’m a carcass on the sea floor (yeah)
So say this shit is too corny
it tastes better to me than, ‘ooh poor me’
I’m just trying to sing a different tune
and then fit into a world that didn’t have room for me. 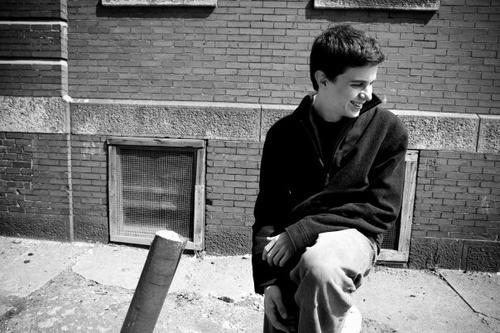