“Trine 2” is a side-scrolling action platform and puzzle video game developed by Frozenbyte. It is the sequel to Trine and was released on Windows, OS X, PlayStation Network and Xbox Live Arcade on December 7, 2011 and for Linux on March 31, 2012. Trine 2 allows three players to play the iconic roles of a wizard, a thief, and a knight in a simultaneous cooperative mode. A Director’s Cut edition was confirmed during Nintendo’s conference at E3 2012, and was available via Wii U’s eShop[6] on the console’s launch day in all regions except Australia. The Director’s Cut edition is Frozenbyte’s first self-published title.

Goblin Menace expansion: Zoya and Pontius battle a shaman in this scene from the Cloudy Isles chapter, part of the Goblin Menace expansion. The heroes return home after saving Isabel’s kingdom, yet they fail to realize they forgot to deal with the invasion on the their homeland planned by the goblins they encountered in the wilderness. While relaxing in a tavern, the attack begins, and the three decide to reach the town walls to help defend the city; unbeknownst to them, however, a band of goblins has been dispatched to Amadeus’s cottage to kidnap his (very scornful) wife Margaret. The trio reach the walls and fight a goblin siege engine, but then the goblin leader, an inventor named Wheeze, appears and shows their hostage (who angrily demands her husband to save her). Their hands tied, the heroes are captured by a wyvern which spirits them away. They are left next to a temple in a distant desert, but are somewhat perplexed as they are still bound by the Trine’s magic yet the artifact is nowhere to be seen and guide them as it did before. Exploring the temple, they discover it was built by an ancient goblin civilization that was destroyed by desert worms; they also find a mural depicting a human-like deity worshipped by the goblins. As they are leaving the temple, they are surprised and eaten alive by such a worm. The three manage to escape from the belly of the beast and find themselves close to a factory of flying machines used by the goblins, where they overhear that Wheeze is building a battle tank on the floating Cloudy Isles. The heroes steal a flying carriage and set course to the Isles. On Cloudy Isles, they confront and defeat Wheeze, then search for Margaret. As it turns out, the Trine was keeping her safe all along by shielding her in light. Pontius realizes that the goblins may have kidnapped her due to her resemblance to the ancient goblin deity. Relieved, Amadeus thanks the Trine and the heroes hope they can return home without starting a new adventure on the way. From Wikipedia, the free encyclopedia. 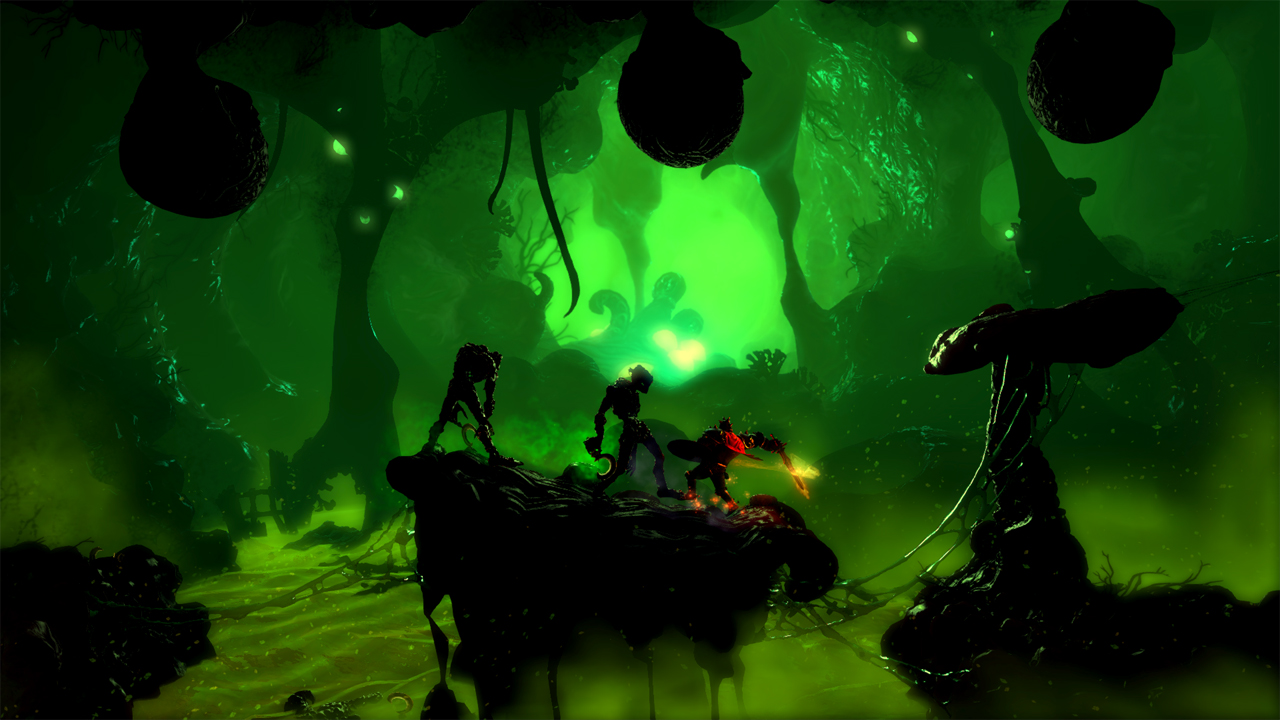