Skip to content
Home » Music » Tiffany Evans – Give Me Wings

Tiffany Evans’ big voice can shift a building from its foundation. The petite, soft-spoken young woman, who is refreshingly polite, is at first seemingly like any other teenage girl. She knows the latest dance moves, spends much of her time on Twitter and lives for fashion. However, that’s where teenage similarities end and the wonderfully complicated, talented world of Tiffany begins.
Tiffany Evans came to the attention of music fans in 2003 as a ten-year old competing on “Star Search.” After three appearances, she went on to win the crown in the junior division competition. Tiffany also became the only performer in Star Search history to receive perfect five scores on all her appearances. TV hosts Oprah Winfrey and Jay Leno responded by asking her to perform on their daytime and nighttime shows, respectively. Blown away by Tiffany’s talent, Oprah invited the young star back for a second time. The big smile and incredible composure on the TV screen witnessed by fans hid a desperate story that fueled Tiffany’s talent. She was literally singing for her survival and that of her impoverished family. One of ten children, Tiffany Evans was born in the Bronx, New York to a mother and father who loved music. When the house they had been renting was sold out from under them, Tiffany’s father moved the family to Atlantic City, New Jersey, in the hopes of securing work and finding a new home. To a little girl born in the Bronx, the faded elegance of Atlantic City held out the promise of a new beginning. “When we got there—oh my goodness—the lights looked like stars!” Tiffany remembers.

Tiffany Evans – Give Me Wings

R&B songstress Tiffany Evans is back with her third installment of her Tiffany Tuesdays series. The powerhouse vocalist digs in her vault to share an unreleased song called “Give Me Wings.”

Before long, Tiffany was working with a vocal coach in preparation of her audition on Star Search. Following her undefeated success, Tiffany sang for executives at Columbia Records and was instantly offered a record deal. With her musical career already on the upswing, she landed a small role on CBS’s “The District,” and appeared in the hit Tyler Perry film, “The Diary of a Mad Black Woman,” in 2004. Young and innocent, Tiffany worked feverishly on recording her debut album self-titled Tiffany Evans. It was her talent that would give her family some temporary hope and relief from their desperate situation. However, as time progressed, family issues would prevail forcing her to make a grown-up decision. At the tender age of 15, Tiffany became emancipated from her parents. It was a decision that gave her strength and determination to get back to the one thing she truly loves: making music. In the summer of 2007, Tiffany showcased her raw talent when she joined Ciara and T.I. on The Screamfest Tour presented by BET. A few months later, the emerging star released her debut album self-titled Tiffany Evans featuring the lead single, “Promise Ring,” a duet with the albums’ executive producer, Ciara. The follow-up single, a sassy anthem titled “I’m Grown” featured rapper Bow Wow and was produced by the prominent Rodney Jerkins.

Tiffany Evans – Give Me Wings Lyrics: 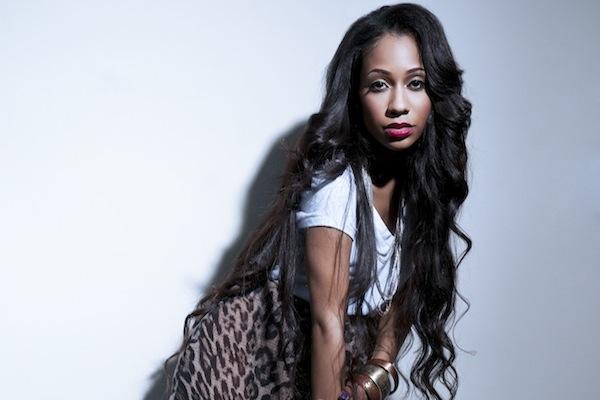