Thick as Thieves is on the forefront of the ever-changing musical spectrum, bringing each member’s unique tastes and musical stylings to the stage. With influences ranging from Nas and Tupac to Creedence Clearwater Revival and Fleetwood Mac, Thick as Thieves exists harmoniously within musical contradictions. Each song presents a unique opportunity for the listener to explore a variety of musical genres seamlessly. Up-tempo and honest, the lyrics and melodies allow the band to share intimate moments with the listener, engaging each audience member with passionate performances and energetic sets. Since forming in 2009, Thick as Thieves has performed regularly around the Los Angeles music scene, including world famous Sunset Strip venues such as “The Whiskey” and “The Roxy”, as well as local hangouts like Molly Malone’s and The Mint. Successful tours of the Northwest, Midwest and Northeast have allowed Thick as Thieves to showcase their talent across the country in the college marketplace. Opening for artists such as Imagine Dragons, P.O.D, Sean Kingston, New Boyz, Young the Giant and Matt & Kim, Thick as Thieves continues pursuing their path as trailblazers in support of their newest EP “These Days.” This summer, Thick as Thieves will be touring the Pacific Northwest as well as writing and recording new music that they will take across the country with them this fall. 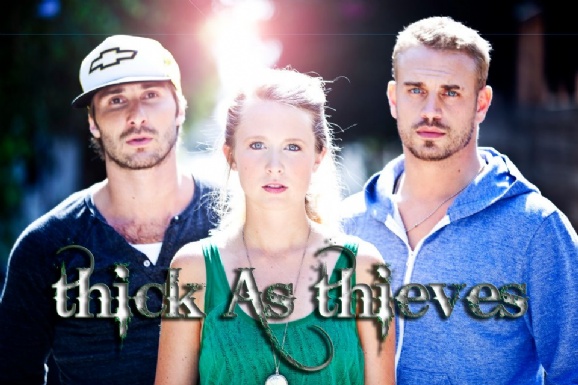