Skip to content
Home » Music » The Vex: Living In The

Though hailing from London’s outer fringes, where the capital unceremoniously bleeds into Kent, The Vex actually came into being some 1,500 miles away, with an Eighties pop superstar playing his part. While on tour in Moscow with a previous band, the schisms in the group were made apparent by an offer of management from one Adam Ant. The faction that opposed the deal broke away to form The Vex, playing their debut gig at Moscow’s BlastFest, where the only thing that wasn’t ice-cold was, typically, the band’s beer rider. Back in the UK, Josh (guitar/vox), Jacko (guitar/vox), Andrew (bass) and Joshua (drums) soon honed a sound inspired by the classic roots and rock of both Kingston, Jamaica, and London, England. Dealing in dirty guitars and big beats, played with passion and precision, the quartet’s heavy rocksteady sonics became a draw on both sides of the Thames, their ferocious shows earning them a rep as one of the best live bands on the circuit. The Vex hit hard and they cut deep. Spin this EP and hear for yourself. 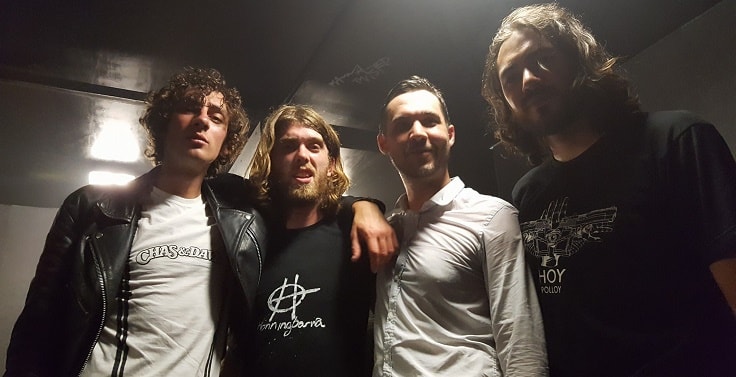 A vital meditation on life, death and melodica, The Vex’s eponymous third EP ups the ante with its vice-like grooves, searing rock’n’roll edginess and volcanic dynamics, peaking with the fluid vocals of Jacko and Josh. It was recorded straight to tape at Ranscombe Studios in Medway and engineered by Jim Riley, key protagonist of the famed Medway scene. Within are five songs that tackle the big issues impacting on 21st-century existence, evidence of the band’s awareness that in our wide, wonderful and sometimes terrifying world, peace, love and unity are the only things that truly matter.

The Vex: Living In The

A visceral rejection of the self-remove and narcissism engendered by social media, ‘Living In The’ broils with righteous indignation, recalling The Clash’s ‘Know Your Rights’ in its call-to-arms intensity. As Vex frontman Jacko explains: “Inspired by the wonderful words of English philosopher Alan Watts, who has become a huge influence of mine, ‘Living In The’ is about existing in an eternal NOW. It’s all there ever has been and all there ever will be. With today’s mobile phone culture, it sadly seems more important to photograph or record an event than to be totally present and take it all in. As the song’s title suggests, we play and feel the NOW.” Direct from its opening snare-drum salvo, ‘Living In The’ is a boisterous ska-punk belter powered by distorted rocksteady bass riffs, thunderous kick drum and a saw-toothed lead solo. Jacko and co-singer Josh add the colossal hooks to complete a track so absorbing that, as the mantra demands, it holds its listeners utterly in the present, rapt with the here and now.

The Vex: Living In The Lyrics: