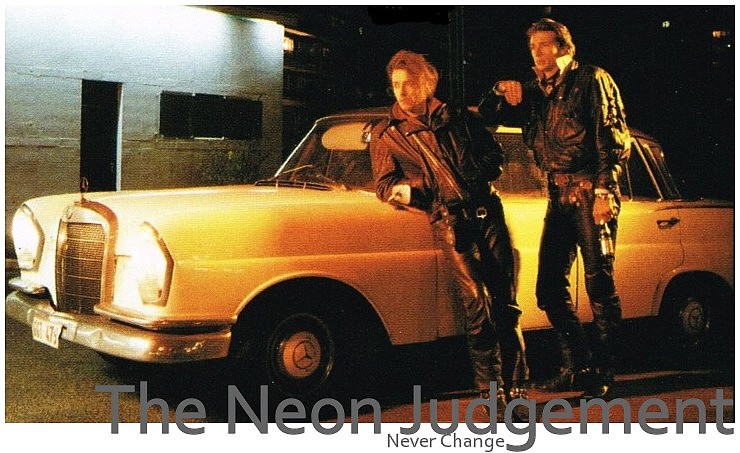 The Neon Judgement is a Belgian New Wave band, formed in Leuven in 1981 by Dirk Da Davo (keyboards/vocalist) and TB Frank (guitarist/vocalist). These Belgian musicians have often been considered the pioneers of Electronic Body Music (EBM), together with another Belgian band Front 242. The high-tech genre from the early 80´s, combining industrial and electro music, from which later originated new beat and techno.

Davo Da Davo and TB Frank veered between minimalistic industrial drones and odd, new waveish synth pop and dance music, underlain by cold, mechanical rhythms. Their initial music is aggressive, danceable and dominated by synthesizers and drum-machines. A bit later on in their career the guitar also gets a prominent place in their music.

All images copyright © The Neon Judgement / Screenshots by blog.cheatbook.de

Since the early eighties, TB Frank and Dirk Da Davo have been the creative forces that have made The Neon Judgement a household name in circles where musical narrow-mindedness is not considered a bonus. Emerging vibrant and violent from the small town Leuven near Brussels, in the early eighties,they started to build up their own sound.

Cold war propaganda, the installation of Reagan’s cruise missiles, death throes of the steel industry… For young hopefuls with the sheer audacity to be out of a job, Belgium in the early eighties is shrouded in a sombre mist. For TB Frank and Dirk Da Davo, however, this dreary background turns out to be an invaluable source of inspiration: for The Neon Judgement, all it takes to become one of the most relevant bands of its timeframe, is a minimum of instruments and a surplus of anger and frustration to vent. Motorik beats from primitive drum machines bounce against TB’s jerky guitar riffs, while Da Davo forces analog grunts and sweeps from his bad-tempered synths. Lyrics are sparse, and are shrieked or spat out like slogans of a restless heart. Songs are called ‘Factory Walk’, ‘TV Treated’, ‘Too Cold To Breathe’ or ‘Concrete’, and while scoring the soundtrack to this social ice age, the band also provides the foundations of a number of electro genres to come.

Later, TNJ’s output will become less glacial and more melodic, in spite of their ever present tendencies to experiment with form and technology. Musically, moods – be it a Johnny Cash country twang or a Serge Gainsbourg cafard – may colour the overall atmosphere, but the main building blocks remain: anger, love, beats, and songs that are written because they have to be. When TB Frank and Dirk Da Davo decide to take a sabbatical in 1999, it’s exactly that feeling of necessity that keeps on smouldering in the hearts of the many fans they’ve made along the way. Fans like Dave Clarke, Tiga or the Hacker, who’ve meanwhile become pivotal figures themselves in an ever expanding electro scene. But respect and kudos don’t limit themselves to a small incrowd: when the band take to the stage of the Ancienne Belgique in September 2007, the place is packed to capacity…

The Neon Judgement will continue to give art terrorism a good name, finding new ways of marrying noise and beauty, machines and magic.This aggressive heart keeps on beating.
Light up a legend!