Skip to content
Home » Music » The Chainsmokers & Tritonal: Until You Were Gone ft. Emily Warren

Wise beyond their years and aggressively handsome, these two overachievers are focused on success… Never before has the world seen two furry browed individuals such as these two (seriously they have really bushy eye brows)… As you might have imagined Alex and Drew did not meet on the set of their Vogue Cover shoot while surrounded by super models, but rather somewhere else. Apart from Social Darwinism, the thing that separates these two men from the rest is their unsettling and uncanny ability to discover and create trends. They find the parts of things that people actually give a shit about, whatever they may be, and focus on creating and improving those parts. With live sets and productions that their own mothers describe as, “sounds nice, but a little loud,” these two always put on a show that was not ever described as sexy and life-changing, but should be. Apart from their unique personalities and boyish good looks, they have many similarities. They each graduated from prestigious North-Eastern Universities, they like hot chicks in yoga pants, enjoy a good burger, and have been rejected from many of the venues they now play at. 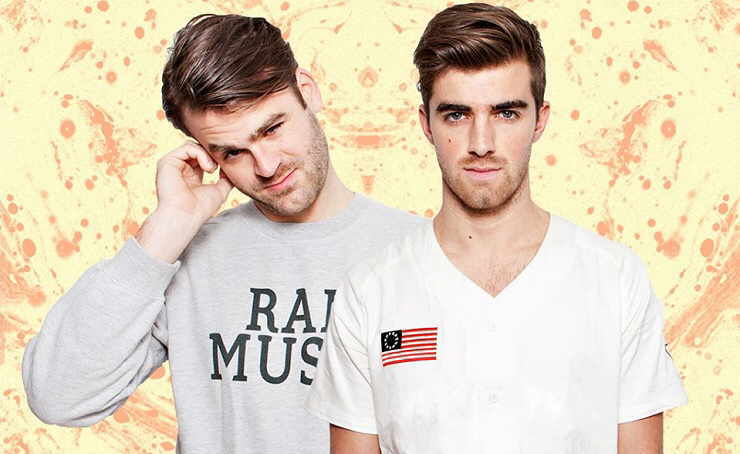 The Chainsmokers have become the hottest young American EDM DJ duo. Their live shows are becoming the most sought after in EDM. Their wild antics, hilarious personalities, and addicting productions have fans interacting with them non stop and running to see them live every chance they get. Their signature sound has its foundations in Indie, Progressive and Pop Music. On the production front, their original tracks have all reached the Beatport top charts and their remixes always hit #1 on the HypeM charts. They’ve gotten immense support by friends such as Nicky Romero, Steve Aoki, Pete Tong, Afrojack, Tiesto, W&W, and more. Their first major release, #SELFIE, and it’s official music video swept the world so look out for much more to come!

The Chainsmokers & Tritonal: Until You Were Gone ft. Emily Warren

So what happens when 2 New Yorkers and 2 Texan’s get together… Actually that sounds like it would be some political debate, but in this case fucking great progressive House! So basically Tritonal hit us up maybe 5 months ago about working together on a track! We had always been HUGE fans of their work and literally the same day we were messing around with this Emily Warren Vocal. Tritonal sent over this demo idea and it was so dope! Over the next couple months we tweaked it and eventually arrived at a perfect blend of both our styles. Hats off to Chad and Dave though, such legends, and unbelieveable producers… you think you know about sound design, take a seat cause these dudes will fuck your world up! Nevertheless, in the end we wound up with a beautiful progressive track with an incredible vocal that will get stuck in your head instantly! Literally Emily Warren is one of the best writers out there right now!

The Chainsmokers & Tritonal: Until You Were Gone ft. Emily Warren Lyrics:
Thought that I’d be better off if I were on my own
I tried to put my finger on the moment we were wronged
But the taste turned bitter, so I pulled the trigger
Not so easy to move on, I guess I should have known

Ever since I left you, I’ve been trying to get you back
And it keeps getting worse
I’m burning on the inside and the truth is that I, didn’t know how good you were
Until you were gone (x2)

I was always told that only time would heal the pain
Yet even though it’s been so long it still hurts just the same
Yet now I’m finding, that the break was binding
Let’s take back everything I said oh won’t you just come home

Ever since I left you, I’ve been trying to get you back
And it keeps getting worse
I’m burning on the inside and the truth is that I, didn’t know how good you were
Until you were gone (x2)