Talib Kweli Greene (October 3, 1975) is an American rapper who performs under the name Talib Kweli. His first name, Talib (طالب), in Arabic means “student” or “seeker”; his middle name in Swahili means “true”. Kweli gained prominent recognition through Black Star, a collaboration with fellow MC Mos Def. Kweli has confirmed the title of his next album will be Prisoner of Conscious, a title derived from Talib’s constant labeling as a “conscious rapper” and based on Nigerian reggae artist Majek Fashek’s album “Prisoner of Conscience.” Kweli began working on “Prisoner” before “Rainbows” was released, and put cuts that were originally intended for “Conscious” on “Rainbows”. He also confirmed that he will reunite with MadLib to offer Liberation 2. Upon its May 7, 2013 release Prisoner of Conscious was met with generally favorable reviews from music critics, and debuted at number 48 on the Billboard 200 chart, with first-week sales of 10,000 copies in the United States. Shortly after in August 2013, Kweli announced that in 2014 he will release his next studio album, Gravitas which will contain production from Q-Tip. However, on October 5, 2013, Kweli revealed that Gravitas would be released independently on December 15, 2013. He also revealed the cover artwork, and that the album would feature production by Q-Tip, Oh No, LordQuest, and Rich Kidd. Wikipedia®.

[Verse 2]
A feeling of panic engulfin the whole planet
Yet my words are slow dancin, my language is romantic
Vocabulary that’s bustin your capillaries
My freedom’ll taste sweeter than juices of blacker berries
My adversaries speak I’ll of my name, I’m so sick
Attack is very guerilla, my game is so pimp
Everything fall into place, it’s gravitational
Profit stay in the black, the shade is so un-fadeable
Healthy relationship make your other ones better
I’m Lee Scratch Perry, they call me the upsetter
For the cheddar get the bread up
Mr. International call it the bruschetta, the spiritual newsletter
I wish you knew the arc of the story and knew your part
You’re lookin into my heart or just lookin to be a part
From a boss in my prime, look how we crossin the finish line
How you tired, I stay wired like I was offered a line
[Hook]
[Verse 3]
Uh, uh
I don’t wanna bang it or beat it, hit it or stab it
You’re listenin to voodoo, I call it the black magic
You jammin up the traffic, you bubble, it don’t stop
It might blow up but it won’t go pop
“Pow!” That’s the sound like onomatopoeia
Got me floatin when you (Rockin My Boat) like you Aaliyah
Got them African features like people out in Bahia
Mix tobacco with the reefer like you was a European
When I leave I’m gonna miss you, (Official) like Kardinal
Trust I’ll come back and I’ll visit for carni-val
When I come back around, take me out on the town
And you can show me how you put it down
My favela love, man I fell in love, man I fell in love
Man I fell in love, man I fell in love
Man I, man I fell in love
Man I, yea, yea yea…
Hook – latter half… 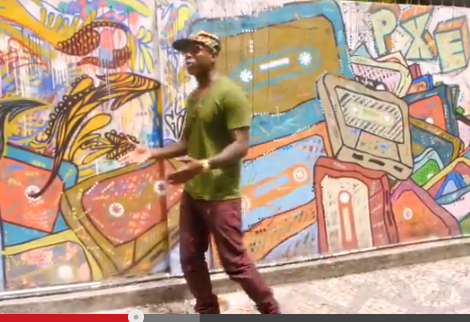