Skip to content
Home » Music » Sweet Soubrette – Be My Man

Sweet Soubrette features the songwriting, vocals and ukulele of Ellia Bisker, whose dark, edgy love songs have captured fans’ hearts and critical praise since she began playing solo gigs with her ukulele in 2006. Sweet Soubrette’s first appearance was in the Bindlestiff Family Cirkus’s Winter Cabaret in NYC, after which she quickly took off in the NYC independent music scene, followed by international tours in France (2008) and Italy (2010) and festival appearances including CMJ, the Paris Uke Fest, the Extremely Hungary Festival, the New York Uke Fest, and the Berkshire Fringe. Among other honors, Bisker has received two ASCAPlus Awards for her songwriting. With the 2008 release of debut album Siren Song (MH Records), Sweet Soubrette began earning increased attention from reviewers and fans alike, and the album received high rotation on national college radio and positive reviews in the indie music press. Since then, Sweet Soubrette has expanded into a full-fledged indie rock band that ranges from a 4-piece (with violin, bass and drums) to an 8-piece big band (adding keyboard, trumpet, trombone and sax) in concert. In 2011 Sweet Soubrette released a second record, Days and Nights, whose dark pop sensibility has earned comparisons to Amanda Palmer and Regina Spektor, followed by a tour of the Northeast to rave reviews (“Dark vaudeville-pop…sensational.” -Philadelphia Inquirer; “Indie rock meets cabaret.” -Worcester Magazine), college gigs and festivals (including the Deli Magazine’s CMJ showcase), and performances at some of NYC’s most beloved venues, including Southpaw, Rockwood Music Hall, the Knitting Factory, Jalopy, and the Living Room. Sweet Soubrette is currently working on new material and new recordings featuring the big band, with a single release and video in the works. “One of New York’s most intriguing songwriting forces…Bisker has charmed audiences with her rock star command and intelligently crafted music, generating a buzz for Sweet Soubrette that extends way beyond the borders of New York City.” -The Deli Magazine

Sweet Soubrette – Be My Man

Glittering glamour meets bad communication in Sweet Soubrette’s infectious, soul-influenced disco-pop number “Be My Man,” in which the ukulele-wielding chanteuse sings about love, longing, and the things we just can’t talk about.

Sweet Soubrette – Be My Man Lyrics: 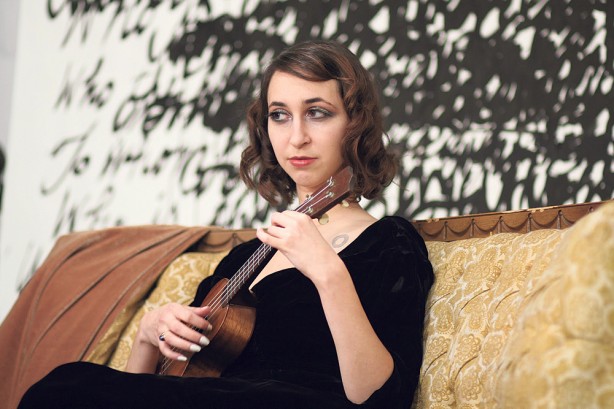