Skin Trade (2015) – Skin Trade is an Thai-Canadian action-thriller film directed by Ekachai Uekrongtham and written by Dolph Lundgren, Gabriel Dowrick, Steven Elder, and John Hyams. It stars Dolph Lundgren and Tony Jaa as cops who take down a human trafficking ring. When a tough-as-nails New York cop finds his family murdered by a drug kingpin, he swears revenge and hops on a plane to pursue their killer to Bangkok. Once in the seedy Thai underworld, he teams up with a local detective to bust heads and right what has been wronged. While this may sound like a familiar set-up for a buddy/cop movie, action buffs should be pleased to hear that this movie will unite Dolph Lundgren (The Expendables) as the NYC cop with Tony Jaa (Ong-Bak) as the Thai detective! You may recall that Dolph and Tony made something of a deal: Dolph would star in a Thai movie with Tony – the currently filming A Man Will Rise – and then Tony would make the trip to America to shoot a movie with Dolph. Now we know that American film is Skin Trade.

Amidst the harsh realities of human trafficking where humans are traded like commodities, “Skin Trade” plunges into the seedy world where little is just pure black or white. This new movie stars Dolph Lundgren, Tony Jaa, Michael Jai White, Celina Jade, Peter Weller, Cary-Hiroyuki Tagawa, and Ron Perlman. After his family is killed by the Serbian boss of a global crime syndicate, NYC detective Nick goes to S.E. Asia and teams up with a Thai detective to get revenge and to destroy the syndicates human trafficking operations.

Plot summary: A tough NY cop, Nick (Dolph Lundgren), runs afoul of the Russian mob engaged in human trafficking, and they end up killing his wife and daughter for revenge. Determined to make them pay, he follows the kingpin to Bangkok, the hub of their activities. He teams up w/ a Thai detective, Tony Jaa, and they decide to wipe out the entire organization and terminate their business entirely. 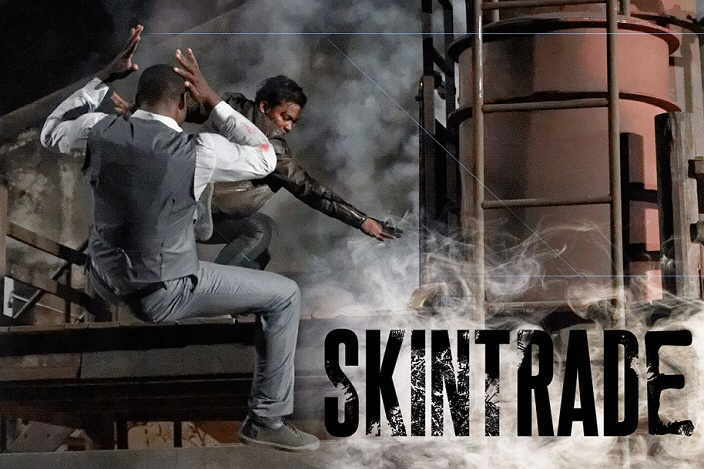