Shadow of the Tomb Raider is an upcoming action-adventure video game developed by Eidos Montréal in conjunction with Crystal Dynamics and published by Square Enix. It continues the narrative from the 2013 game Tomb Raider and its sequel Rise of the Tomb Raider, and is the twelfth mainline entry in the Tomb Raider series. The game is set to release worldwide on 14 September 2018 for Microsoft Windows, PlayStation 4 and Xbox One. Set two months after the events of Rise of the Tomb Raider, its story follows Lara Croft as she ventures through Mesoamerica and South America to the legendary city Paititi, battling the paramilitary organization Trinity and racing to stop a Mayan apocalypse she has unleashed. Lara must traverse the environment and combat enemies with firearms and stealth as she explores semi-open hubs. In these hubs she can raid challenge tombs to unlock new rewards, complete side missions, and scavenge for resources which can be used to craft useful materials. Development began in 2015 following the completion of Rise of the Tomb Raider, lasting until July 2018. Shadow of the Tomb Raider was designed to conclude Lara’s journey begun in the 2013 reboot, with a key theme being descent both through the jungle environment and into her personality. The setting and narrative was based on Mayan and Aztec mythologies, consulting historians to design the architecture and people of Paititi. The gameplay was adjusted based on both fan feedback and the wishes of Eidos Montréal, incorporating swimming and grappling while increasing difficulty tailoring. Camilla Luddington returned to provide voice and motion-capture work for Lara. Wikipedia®. 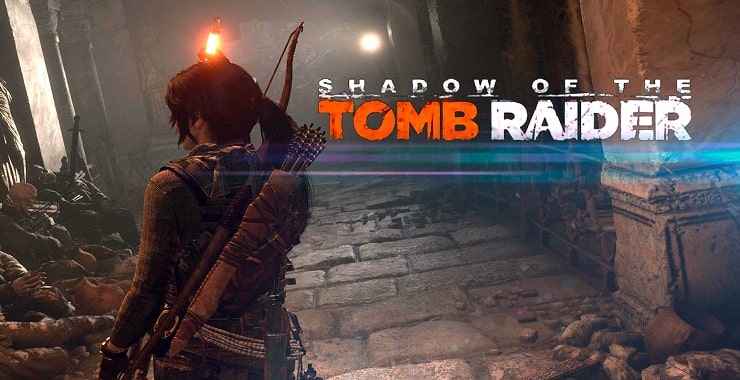 Experience Lara Croft’s defining moment as she becomes the Tomb Raider. In Shadow of the Tomb Raider, Lara must master a deadly jungle, overcome terrifying tombs, and persevere through her darkest hour. As she races to save the world from a Maya apocalypse, Lara will ultimately be forged into the Tomb Raider she is destined to be.

Survive and Thrive In the Deadliest Place on Earth: Master an unforgiving jungle setting in order to survive. Explore underwater environments filled with crevasses and deep tunnel systems.
Become One With the Jungle: Outgunned and outnumbered, Lara must use the jungle to her advantage. Strike suddenly and disappear like a jaguar, use mud as camouflage, and instill fear in enemies to sow chaos.

Discover Dark and Brutal Tombs: Tombs are more terrifying than ever before, requiring advanced traversal techniques to reach them, and once inside they are filled with deadly puzzles.
Uncover Living History: Discover a hidden city and explore the biggest hub space ever found in a Tomb Raider game.

Shadow of the Tomb Raider Walkthrough