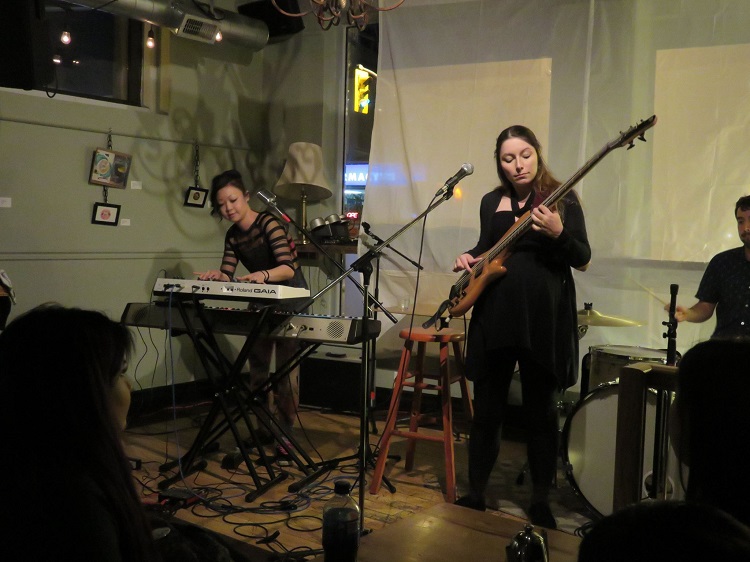 Scary Bear Soundtrack is an Ottawa-based indie dream pop project featuring the works of Gloria Guns. Through ample use of synths and heavy reverb guitars processed through chorus pedals and vintage amps, their music moves from dance jams to powerfully pensive shoegaze tracks. Their songs deal with motifs of love, loss and the great outdoors, as well as socio-political issues such as race, environmental conservation and violence against women (VAW). Their critically acclaimed anti-VAW song “Faultlines” made it to the national final top 4 in CBC’s Searchlight Competition for Canada’s Best New Artist. The band has played at Ottawa Bluesfest, Ottawa’s Mirror Mountain Film Festival, the Kitikmeot Trade Show, and NWT Pride, in addition to rocking out local house parties. Written and produced in Cambridge Bay, Nunavut, their current EP “Ovayok Road” reflects life in the North from when Gloria lived in the Nunavut

Recorded and mixed in Ottawa by Mike Kuehn

Lyrics:
you saw me at the bar where you were drinking
with my black hair and my exotic being
you reeked of cheap cologne and Asian fetishes
you hit me with your gaze, so male and colonialist

you asked me where I’m from, I said Waterloo
my honest answer wasn’t good enough for you
“tell me where you’re from, where you’re really really from?”
I’m finding your stupid seduction burdensome

so somehow your sexual history
makes you entitled to insult me

surprise! the object speaks
against your narrow narratives of the periphery
tired of your tedious talk, reducing me
to your exotic other
designed to stroke and fodder
your superiority
passed down by your forefathers
defined to mock and smother
my identity