Never branding himself to any particular style or sound, Ry has built a loyal following over the past few years in a city already filled with talent – Melbourne. Born and raised there, some may call this twenty-something’s music Hip Hop, Rap, or something completely different. Such work has received airplay on Triple J, PBS, SYN FM and also on the USA College Radio Circuit. Ry’s music videos have garnered attention from both local and international music blogs, and praise for doing them independently – including a feature on Channel Eleven’s ‘The Loop’ TV Show. Ry reached #26 on Triple J Unearthed’s most played artists of 2012, and the recent announcement of being selected as a winner of the 2013 Triple J Unearthed x NIDA Video Competition has cemented that the hype is real. His latest EP offering – ‘Wall Street’, contains 10 original songs and sees Ry venture to new heights and solidify himself as one Melbourne’s most promising new talents. Upon release, it gathered thousands of downloads and received public praise online and worldwide. Ry’s EP Wall Street was recently launched in Melbourne at the Worker’s Club in Fitzroy to a packed house that came to celebrate the occasion on ANZAC Day April 25th. “This is a really big tune. Hitting at the end of summer it’s full of fun and slick production, smacking with a bit of Mariah/Jigga ‘Heartbreaker’ vibes. Real good.” – Dave Ruby Howe (Triple J) (Review for the song ‘Ride For Me’)

Ry – Ride For Me (Feat Shadow Kitsune) Lyrics:
Save a Ride for me/
As far as I can see you are all I need/
And I’ll never be gone/
Knowing that you smile when I sing my song/
Verse 1:
E-type Jag/Wood grain dash/
Reminise on wild days that we’ve had/
Reflecting on, the reflection of, my
Expensive blonde, her shades in the sand/

Look back at the brillaince/
You in a bikini, believe me it’s brilliant/
And you look like a million, bucks/
Gotta me feeling high like helium/

Quick dash down Swanston/
Tell the homies go, so we roll like koston/
Suburbs got us feeling like we’re boxed in/
Hit the road, Don’t care what the cost is/

And my girl rides shotgun/
Bonnie and Clyde, on the grind till we got some/
She can’t knock the hustle/
Forever got my back when I land in some trouble/
Chorus:
Shadow Kitsuné:
Don’t you ever hide from me/
I’ve been up all night, lonely/
I’ll be by your side, homie/
Won’t you save a Ride for Me/
Ry:
Save a Ride for me/
As far as I can see you are all I need/
And I’ll never be gone/
Knowing that you smile when I sing my song/
Verse 2:
Sitting in a sports car/
Tell me what your thoughts are/
Gone in the night like we’re hiding from report cards/ and/
You’ll never let me fall far/
So I hold you up high like a hallmark/

You should stand on my skateboard/
God damn, have i told you you should skate more?/
Polaroid, killing it in great form/
Girl next door, crushing on since grade 4/

God bless, you and I against them/
When I say those three words I am deadset/
I’m a buy you the world when I jetset/
You ain’t just a girl you’re my girl and a best friend/

I can see it in your face now/
Don’t ever tell me I’m phased out/
Friends don’t understand how/
They’ll never know/
Verse 3:
Premium, never seem dressed down/
Even when you dressed down, better than the rest out/
Girls see you gotta change how they dressed now/
I love that, never change you’re the best girl/

The Jackie to my JFK/
Just know that I’m La Guardia (I’m a guard ya), not JFK/
And I can see you’re happy when we make LA/
The Downtown girl, you’re a Soho babe/

So hot, wonder why I got a fever/
Soap opera, your an after school feature/
Feels like when Drazic met Anita/
Heart break high that’s a lie, never leave her/
Chorus x 1
Outro Singing (Shadow Kitsuné) 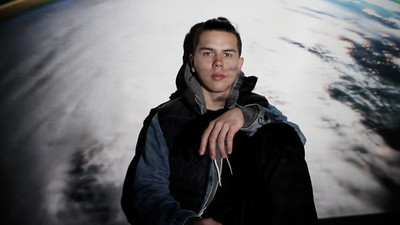