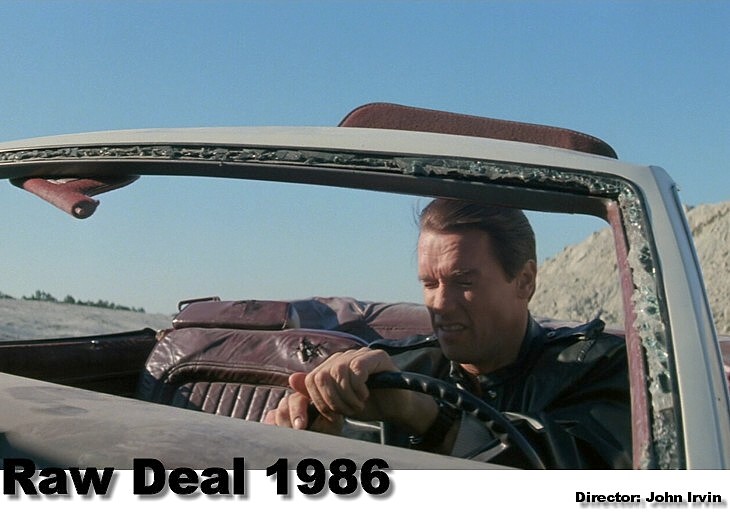 Plot: Mark Kaminsky is kicked out of the FBI for his rough treatment of a suspect. He winds up as the sheriff of a small town in North Carolina. FBI Chief Harry Shannon, whose son has been killed by a mobster named Patrovina, enlists Kaminsky in a personal vendetta with a promise of reinstatement into the FBI if Patrovina is taken down. To accomplish this, Kaminsky must go undercover and join Patrovina’s gang.

On December 16, 1985, in a remote wooded cabin a mob informant with information on Luigi Patrovita, the strongest of the Chicago Mafia Dons, is being protected by FBI bodyguards. They are ambushed by a hit squad armed with automatic weapons who brutally slaughter the bodyguards and the witness. One of the agents killed while protecting the informant was Blair Shannon, son of FBI Chief Harry Shannon (Darren McGavin), who vows revenge.

Small-town sheriff Mark Kaminsky (Arnold Schwarzenegger) goes home to his wife (Blanche Baker) who is angry at what their lives have been reduced to and in a drunken fit, throws a cake at Mark. Kaminsky once worked for the FBI, but five years ago he brutally beat a suspect who molested, murdered and mutilated a young girl. He was given the option to “resign or be prosecuted” by the ambitious prosecutor Marvin Baxter (Joe Regalbuto), who is now Special Federal Prosecutor heading up a committee looking into the dealings of mobster Luigi Patrovita (Sam Wanamaker).

Shannon calls Kaminsky in on a secret assignment of revenge, to infiltrate Patrovita’s organization and “tear it up”. Harry cannot do anything officially, and the FBI has a leak who has been getting agents killed, which is why Kaminsky must go in secret. Harry dangles the prospect of Kaminsky being re-instated with the FBI, leading to Kaminsky faking his own death in a chemical plant explosion and posing as convicted felon Joseph P. Brenner. Kaminsky manages to get an audience with Patrovita’s right hand man Rocca (Paul Shenar), and convinces them of his worth by harassing Martin Lamanski (Steven Hill), a rival mob boss who is trying to move in on Patrovita’s territory. While at Rocca’s underground casino, he makes the acquaintance of Monique (Kathryn Harrold), a woman who works for Rocca’s top lieutenant Max Keller (Robert Davi).

Kaminsky continues to work his way into the good graces of the Patrovita family, including devising a plan that recovers $100 million of heroin and cash seized by the feds from one of Patrovita’s hideouts and assisting in Lamanski’s assassination. Keller isn’t convinced that ‘Brenner’ is all that he says he is. Keller eventually manages to find proof of the deception, showing Kaminsky’s photo to a police informant who arrested the real Brenner in the past. The leak the FBI has been looking for is revealed as none other than Baxter, who is forced to stay close to Patrovita. Kaminsky accompanies Keller to a cemetery for a hit job, but finds out that the target is Harry Shannon, which causes him to blow his cover. Kaminsky and Shannon manage to kill Keller and the other hit man who came along, but not without Shannon being shot and severely wounded.

Kaminsky escapes, assisted by Monique (who has grown fond of him). He tells her to go to the airport and wait for him. He then suits up, gathers an arsenal of firearms and raids one of Patrovita’s gravel pits, eventually killing everyone (to the tune of “Satisfaction” by the Rolling Stones) and walking off with some of the cash left behind. He then sets off to Patrovita’s casino, hidden in a basement level of a high class hotel. There he single handedly wipes out all of Patrovita’s soldiers, including the men directly responsible for the murder of Blair Shannon and his fellow FBI agents. Rocca and Patrovita flee to a back room, but before they can do anything Rocca is cut down in a barrage of gunfire. Patrovita flees into an office pleading for his life, but Kaminsky mercilessly guns him down and leaves his body sprawled on a table. On his way out, he encounters a whimpering Baxter and offers him a gun with the same line Baxter gave him five years earlier: “Resign, or be prosecuted. Any way you want it.” Kaminsky starts to walk off, and when Baxter attempts to shoot him, Kaminsky turns and shoots Baxter in self-defense. After driving to the airport, Kaminsky hands a duffel bag containing $250,000 in cash to Monique and gets her on a chartered plane, telling her she is free and can start a new life with no obligations to anyone.

The epilogue shows Kaminsky visiting Shannon in a hospital, who was crippled as a result of the gunshot wound to his back and has been refusing any therapy or rehabilitation. Kaminsky has been reinstated into the FBI, and his reunion with his wife has now led to Amy being pregnant. Kaminsky wants Shannon to be godfather to the child, but only if Shannon will attempt to walk. Shannon at first cannot walk easily and angrily asks Kaminsky to leave him be, but then Kaminsky tells Shannon he must show the same strength that made him a good father to Blair. Inspired by the love for his son and his gratitude to Kaminski, Shannon makes a strong effort and eventually manages to walk a few feet on his own, embraced by a smiling Kaminsky.Wikipedia®