Skip to content
Home » Music » Ramonda Hammer: If, Then

Ramonda Hammer is a grunge-pop project from Los Angeles, CA. To answer the question you’re inevitably going to ask, the band’s name is taken from a lady who was featured on the once-popular reality television show Cheaters. The show, in and of itself, represents how front-woman and band founder Devin Davis often sees life – it’s a mix of sad and funny, some people learn and some people don’t, and we take what we can to do what we can. Plus “Ramonda Hammer” just sounds cool. The band delivers a familiar yet unconventional sound. Davis’s songwriting plays with quirky chord progressions, time signature and tempo changes, and dynamic vocal melodies – akin to many of the alternative and grunge bands that made an impact in the 90s. Her lyrics are thoughtful and charmingly raucous, and the songs are symptomatic of heartbreak, angst, self-destruction, self-soothing, human ignorance, and the uncontrollable. The other three fourths of Ramonda Hammer – Andy Hengl, Justin Geter, and Danny Louangxay – turn Davis’ songs into fully flourished anthems! Each instrument has their unique presence – Andy’s melodic and rhythmically clever bass lines, Justin’s unrelentingly expressive guitar riffs, and Danny’s easily aggressive pounding on the drums (not to mention the contagious, excited smile on his face). Although the parts are well thought out, when you get these guys live, it feels like everything magically comes together right there on the spot, and audiences can’t help but be enamored with what this group is doing. 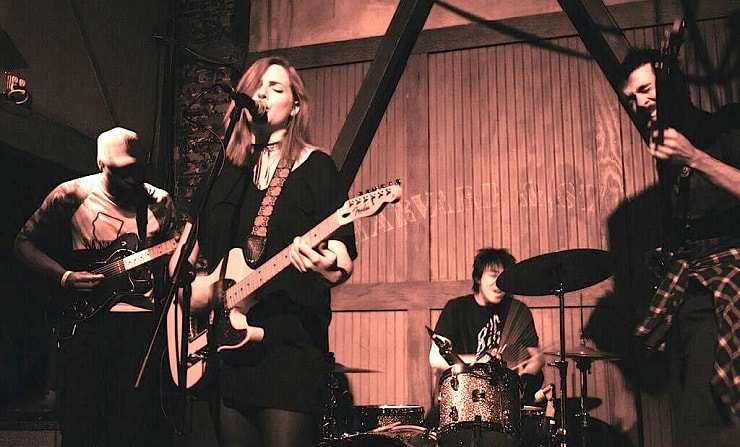 After a successful Kickstarter campaign in October 2015, Ramonda Hammer recorded their first professional album at the legendary Sunset Sound with Grammy-nominated sound engineer Morgan Stratton. The album is titled Whatever That Means, which is not only a playful nod to everyone who’s puzzled by the band’s name, but is a lyric from a track on the album called “See”, in which Davis screams, “I hate that all I write about is how I feel about the people that I care about, and I’ll try to have more depth…whatever that means!” The album will be released in early 2016, just in time for a summer tour. If you want to stay Hammered, follow the band on all forms of social media.

Ramonda Hammer: If, Then Lyrics:
I’m pliable like melting vinyl
And I’ve become learned from books
I probably look like someone who’s done something
But I haven’t amounted to anything

I write, I play, I choke on legato
I scream for you, I look like this
And all at once I can do probably twenty things
But I haven’t amounted to anything

I’m not the only one
I’m not