Following his high octane single ‘Mad Ting’ featuring Bonkaz, Acton’s most important export Podgy Figures is now set to release his debut EP ‘Gingerbread Season’, produced by the beat-making legend Zeph Ellis aka Dot Rotten. The fierce opener ‘Hardest’ is a bold statement that sees Podgy call out fake MC’s over a harsh, stripped back beat – its confidence only surpassed by his relentless delivery. The energy is knocked up a notch as the current single ‘Mad Ting’ bursts into the fray, full of rapid fire claps over a barrage of harsh 909 kicks, with a new-age bassline that provides the anvil for Podgy’s lyrical hammer-blows. The legendary Ghetts is the next grime heavyweight to be brought to the fold on ‘Fire Starter’. The production is reminiscent of a classic grime track, alongside ‘Like That’, where Ellis flips Rebound X’s ‘Rhythm & Gash’ in another before heard way. 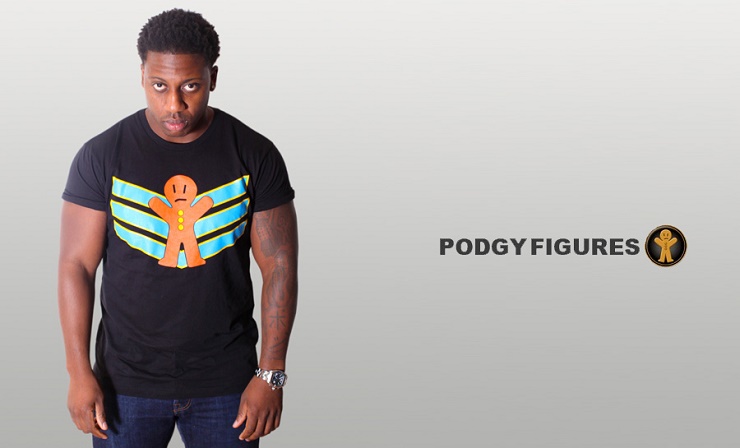 With acclaimed producers like Dot Rotten behind the buttons, ‘Gingerbread Season’ plays host to Podgy’s ever evolving diversity. High energy tracks such as ‘Gassed’ contrast perfectly with the downtempo singles ‘Anthem’ & ‘Turn Me Up’; the latter, a brooding departure from the hard, rave-ready records where emotion is further brought to life by Angel’s smooth R&B hook. Continuing Podgy’s high energy credentials, accompanied by an impeccably apt video, is ‘Gassed’, as gritty as ever, and flitting between the comforts of home and the barrenness of public transport woes of the London Underground station. Both humorous and light-hearted, ‘Wrap Up’ is a trademark single from the Acton native, where he and Ellis further show why theirs is a winning partnership. The jovial track is testament to who Podgy is an artist and the perfect way to close the project.

A multi-faced talent, Podgy Figures has come through poverty to start up his own fashion line Gingerbread Clothing, radio station Podgy FM 91.5, and has garnered acclaim from likes of The 405, Clash, Complex and GRM Daily. Four videos for ‘Anthem’, ‘Podgy Refix’, ‘Turn Me Up’ and ‘Wrap Up The Ting’, combined with his ability to craft an EP that brings dance-floor energy and self-reflection, whilst staying true to grime’s gritty London routes mirrors that of the greats and will no doubt cause heads to turn this summer.