Skip to content
Home » Music » Parade of Lights – Talk To You

Parade of Lights are an alt-electro band based in Los Angeles. Comprised of Ryan Daly, Anthony Improgo, Michelle Ashley & Randy Schulte, the group combines equal parts rock, new wave, and shoegaze to create a unique blend of 80’s influenced pop drawing on inspiration from artists like U2, Depeche Mode, M83, and even Madonna. Shortly after meeting in LA in 2006, they formed the band Polus. After releasing a four-song EP entitled “Wish” and garnering a significant buzz locally, Polus was put on hiatus due to considerable demand for both Daly and Improgo as touring musicians. Even with their rigorous touring schedules, the two managed to keep their friendship intact and exchanged song ideas via email until 2010 when they decided to officially reunite as Parade of Lights. They spent that year and 2011 releasing new music and playing shows in Southern California, Utah and Nevada, which eventually led to support slots for artists such as Imagine Dragons, The Neighbourhood, Fitz & The Tantrums and Thirty Seconds to Mars. In the fall of 2011, POL signed a publishing deal with Imagem Music and got to work crafting their electronic shoegaze anthem rock sound. The debut of that new sonic direction was their September 2012 self-released EP, “Born to Live, Born to Love.” They followed up “BTL” with the June 2013 release of the single “We’re the Kids,” which quickly gained traction online and was added to SiriusXM’s Alt Nation channel, where it continues to receive Top 10 spins and has charted as high as #14 on the channel’s weekly Alt 18 Countdown. The Alt Nation airplay along with spins at stations like Live 105 in San Francisco, KROQ in Los Angeles and KXTE in Las Vegas led to a label deal with Astralwerks Records in August 2013. Currently, the band is working on their follow up EP, which is scheduled for a January 2014 release.

Parade of Lights – Talk To You 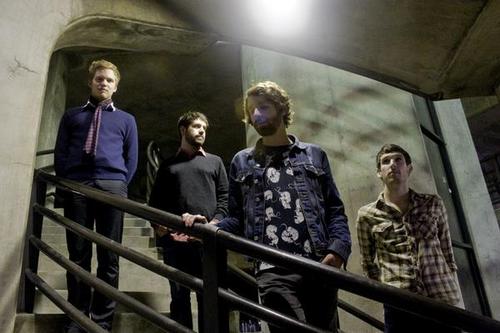