Outlast: Whistleblower (also known as Outlast: Story DLC) is a survival horror video game DLC (Downloadable content) for Outlast, developed and published by Red Barrels Games. It is the prequel to Outlast, revealing the reasons of the Mount Massive Asylum outbreak. It also shows the true ending to the asylum after Miles’ (implied) death. It was released for PlayStation 4 and PC on May 6th, 2014. Similar to its predecessor, combat is impossible and the player must either run or hide from their enemies in order to stay alive. The players can hide in various spots in order to avoid their pursuers, such as nearby lockers, under the bed, in various corners or simply blending in with the darkness. Closing doors will impede enemies and squeezing through small spaces can lose them. Certain scripted events will require a specific action from the player. The only item the player has access to is his camcorder, which is automatically acquired after the main character breaks out of his holding cell. The camcorder is battery operated and comes with a night vision function which is used to navigate through dark areas. Batteries can be found in various spots, usually nearby electronic devices, such as radios, Walkie-talkies, etc. While the camcorder is up and filming, the character will write his thoughts in a notebook. Along the game, the player can pick up various documents, scattered throughout the asylum, that provide a background story for some of the characters. The documents appear as blue folders with “CONFIDENTIAL” stamped on the front. Aside from scavenging batteries and finding documents, certain tasks will require for the player to retrieve a key. 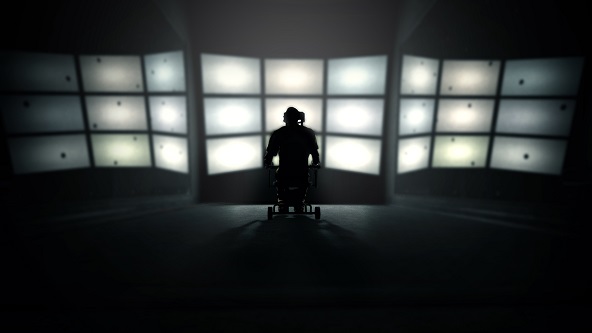