Oh Malô (oh muh-low) presents a shape-shifting sound through their dynamic arrangements as delicate vocals intertwine with ambient guitars and powerful, aggressive drums. They combine influences from rhythmically innovative indie outfits such as Local Natives and Bombay Bicycle Club, vocalists Patrick Watson and the late Jeff Buckley, and the chilling ambiance of Radiohead and Sigur Rós to create an unpredictable blend of timbres. 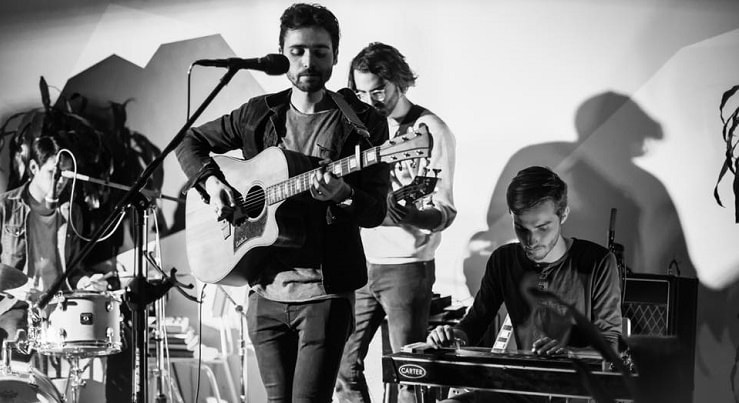 Over the past year, Oh Malô was nominated for “New Artist of the Year” at the 2015 Boston Music Awards alongside local standouts Palehound and Vundabar. They made showcase appearances at both CMJ and CMW, supported several nationally touring acts (From Indian Lakes, The Lighthouse and the Whaler, and Halfnoise), and were dubbed “[one of the] ten acts rising above this year’s fray and worth checking out” in Improper Bostonian Magazine’s annual music issue.

Their debut LP, As We Were, represents the shifting personas that burst forth after the emotional separation from a significant other. Vengeful reds grapple with introspective blues and find balance in a muted, melancholic orange. The colors help guide the unresolved tone of the music as it fights and floats its way through the fifty-minute venture. What begins as an anger-filled, distorted cluster of sound finds its way to a somber, vulnerably reflective conclusion. Written, recorded, and mixed over the past two years at various homes in Boston, Los Angeles, Nashville, and Providence, As We Were is not only a tale of longing but also a representation of the band’s long journey toward this debut release.

Singer/guitarist Brandon Hafetz explains the single as follows:
“Miss You” was written during a very reflective period for me, the calm after the storm if you will. The song has a way of fooling your years into thinking you’re listening to a happy and uplifting song though if you dig deeper past the musical front it still circles back to the themes of yearning and nostalgia that are present on our debut album ‘As We Were’.

I’ve been countin’ the days since our love went away, oh it’s been so long
I’ve been countin’ the ways that I’ve been left and betrayed of this feels so wrong
Oh this just keeps happening, what have I done to deserve all this shame?
But I couldn’t be more wrong to think that I shouldn’t take a piece of the blame

I miss you always, miss you for days on end
Miss you guiltily
I miss that feeling that you always gave me
Miss you painfully…