A native of East Sussex, Natalie Bouloudis first got her musical education in childhood, having played clarinet in jazz bands and had a few guitar lessons at school. From the age of seven she started writing her own music and has been (till recently) a secret songwriter ever since. Having lived in London for the better part of the last decade, she decided three years ago to launch her music into the public sphere under the name Aurora Harbinger. She soon played venues like Servant Jazz Quarters and The Victoria in Dalston, quickly building a loyal fan base that enabled her to successfully crowd fund her debut record. 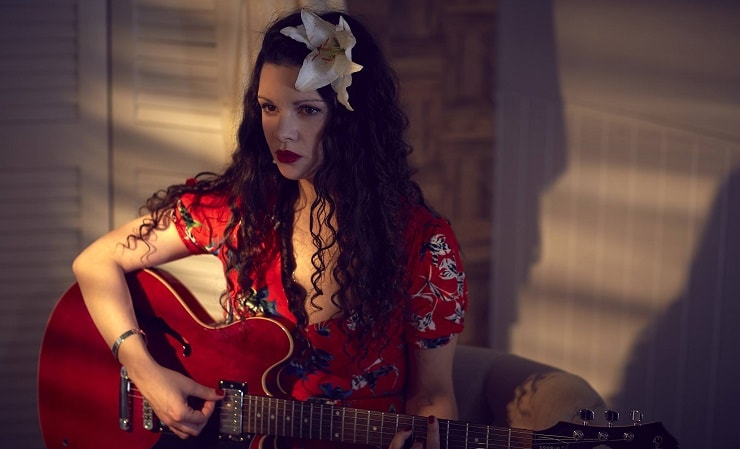 For Natalie, playing live is an important consideration in the songwriting process, a process which focuses centrally on generating atmosphere and intimacy. Her debut EP is her first proper recording and it was all recorded live at Wax Studios in London and produced by Robert Strauss. For Natalie, getting the EP right was dependent on how precisely she could evoke the feelings she had in mind. Though armed with encyclopaedic knowledge of narrative songwriters across the spectrum of folk, rock and jazz, Natalie brings to the table her own brand of atmospheric storytelling. It’s folky in its arrangements, but in terms of sheer vocal delivery she’s a soulful rock and roller, at times calling to mind the visceral and lurching tones of Patti Smith or Etta James. ‘Burning Pier’ may only be her first single, but already it reveals an artist in the classic sense: thoughtful, precise, and led by instinct and imagination.

Natalie Bouloudis’s debut EP is the perfect document of her humbling creative powers at this point in time. Harbouring her own distinct sound, Dead Sea Scripts channels her experiences and meditations into a deeply enchanting record. By turns evoking sixties’ girl band nostalgia with the concise hook-driven songwriting of ‘Firebird’ or entertaining her darker side with the Bad Seed blues of ‘Whirlwind’, Dead Sea Scripts is a panoramic soundscape, loaded with pearls from her mythic lyricism and imagination. Alongside debut single ‘Burning Pier’ are five unheard tracks, with each song merging magical imagery and folk musicality with Natalie’s fundamentally relatable sentiments. ‘Romantic Bullshit Blues’ and ‘Firebird’ see her analysing the emotional tempest of heartbreak with forensic detachedness, and on the record’s spellbinding bookends ‘Raging Forcestress’ and ‘Float’ she reveals the disarming beauty and versatility in her singing voice. Above all, Dead Sea Scripts is the sound of an ambitious artist arriving fully formed and already at ease with her skills both musically and lyrically.

“I wanted to capture a strong empowering feeling in this song, the protagonist is a femme fatale character. I wanted it to sound like a 60’s girl group jamming with a 90’s grunge band. Essentially ‘Firebird’ is about taking charge of your destiny, walking through the fire and coming out the other side just as the mythical firebird or phoenix is the embodiments of obtaining a new life by arising from the ashes of its predecessor this song is about emerging out of darker times stronger than ever and looking forward all the way.”

Natalie Bouloudis: Firebird Lyrics:
The reckless do not walk in a straight line
Old smoke swirls and denies the light
I’ve been dancing in the dark
Holding on to a wicked spark
But what matters most is how well you walk through the fire

You said it first but proved it was worthless
Sweet talking leaves the most unsavoury taste
Paint my lips and blow a kiss
Bite your tongue, I’m so over this .