A native of East Sussex, Natalie Bouloudis first got her musical education in childhood, having played clarinet in jazz bands and had a few guitar lessons at school. From the age of seven she started writing her own music and has been (till recently) a secret songwriter ever since. Having lived in London for the better part of the last decade, she decided three years ago to launch her music into the public sphere under the name Aurora Harbinger. She soon played venues like Servant Jazz Quarters and The Victoria in Dalston, quickly building a loyal fan base that enabled her to successfully crowd fund her debut record. For Natalie, playing live is an important consideration in the songwriting process, a process which focuses centrally on generating atmosphere and intimacy. Her debut EP is her first proper recording and it was all recorded live at Wax Studios in London and produced by Robert Strauss. For Natalie, getting the EP right was dependent on how precisely she could evoke the feelings she had in mind. 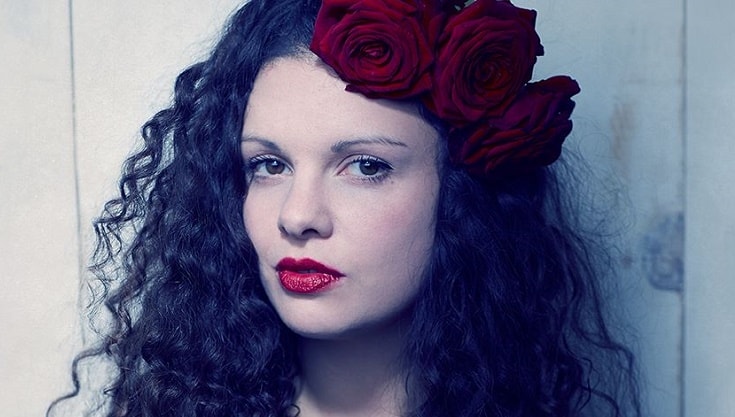 Though armed with encyclopaedic knowledge of narrative songwriters across the spectrum of folk, rock and jazz, Natalie brings to the table her own brand of atmospheric storytelling. It’s folky in its arrangements, but in terms of sheer vocal delivery she’s a soulful rock and roller, at times calling to mind the visceral and lurching tones of Patti Smith or Etta James. ‘Burning Pier’ may only be her first single, but already it reveals an artist in the classic sense: thoughtful, precise, and led by instinct and imagination.

It was while shirking her duties as an arts and culture guide copywriter that Natalie Bouloudis found the seed that would sprout into her debut single. Initially derived from a story she wrote on the job (she wrote various poetry and prose compositions to pass the time), ‘Burning Pier’ is set in a fictionalised amalgamation of the burnt-out husks of Brighton, Hastings and Eastbourne piers. Essentially a meditation on how disasters can both evoke nostalgia and make us question our future in a new light, Natalie conjures all the energy and drama of narrative songwriting forebears like Nick Cave, PJ Harvey, and Kate Bush, while stylistically existing in a sphere of her own. The song was recorded in a live take with the only overdub being drummer Hannah Stacey’s sparkling Rhodes piano. As such, it has all the thrilling tension of a group capturing the thunderclap spontaneity of perfect live communication.