A pocketknife is one of the most utilitarian tools you can possess. “It is small but has a million uses. It can open locks, cut ties and be used as a weapon or even for first aid,” says Monica Birkenes, aka Mr Little Jeans. Pocketknife also happens to be the title of the Norwegian chanteuse’s debut album, due out on Capitol imprint Harvest Records in March of 2014. “I see it as an extension of yourself that symbolizes strength, intelligence and courage.” The titular inspiration for her record comes from a line in lead single, “Good Mistake,” which has already entered heavy rotation on KCRW, the preeminent taste making radio station in LA (where Mr Little Jeans now resides). Pocketknife’s operative metaphor extends to all her music: imbued with mystery and a dazzling interplay between shadow and light. Breathy vocals stab like equatorial sun rays that coexist with nocturnal synths. It’s been like this ever since Mr Little Jeans became a critically revered electro-pop diva a few years back. With a name nicked from a bit character in Wes Anderson’s Rushmore, she quickly elicited comparisons to Lykke Li and Charli XCX, but has carved out her own lane, blending Scandinavian cool with passionate lyrics. Spin raved that her music has “hooks from here to the Aurora Borealis, but [she] swathes them in dark-hearted mystery, bright synths lurking beneath her indelible voice.” The Guardian said her songs won’t escape their heads, calling her an “über-Kylie [Minogue] who writes her own material, has a hand in its production and can boast a clutch of songs better than anything Minogue has done in years.”

While many have placed Mr Little Jeans alongside other Nordic songstresses, her singular voice and sweeping harmonies set her apart from her compatriots. Her breakout song was a moody and contemplative cover of Arcade Fire’s “The Suburbs,” which has racked up millions of plays on YouTube and SoundCloud alone. Since then, her music has appeared in commercials for companies such as Honda, TV shows like Gossip Girl, and in several movies, including 21 Jump Street and Celeste and Jesse Forever. She’s also written and recorded songs for film soundtracks (Iron Man 3), which she greatly enjoys and plans to do more of in the future. “I like trying to capture the mood and intent of somebody else’s story,” Birkenes explains. Born and raised in the woodsy, seaside town of Grimstad, Norway, Mr Little Jeans spent her childhood immersed in music, be it the sounds of her mother’s guitar or Simon & Garfunkel records. She grew up in the church choir, learned piano and guitar, amassed singing competition wins throughout the Norse countryside. Absorbing early influences ranging from Mariah Carey, PJ Harvey and Massive Attack, she sublimated and synthesized the ability to sing in a way that makes you freeze, as though time was momentarily stopped and you’re unsure whether you want to dance or ruminate. As such, the songs on Pocketknife are deeply personal and ripe for interpretation. They’re about ambition and dreams and living with no daylight. It’s this chiaroscuro that sets it apart—capturing the feeling of the ebb and flow of existence, each song its own 24-hour saga. You might have the tools to escape, but you won’t want to. 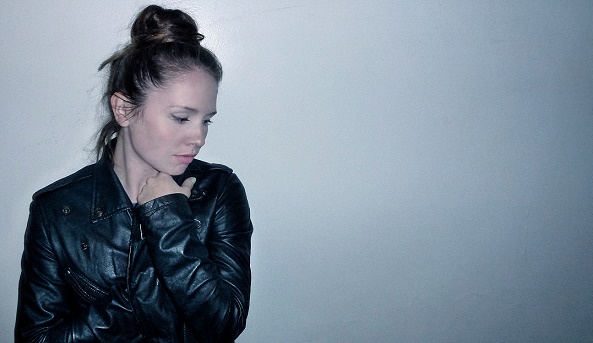