“Mickey One” is a 1965 surrealistic dramatic film starring Warren Beatty and directed by Arthur Penn from a script by Alan Surgal. Its kaleidoscopic camerawork, film noir atmosphere, lighting and design aspects, Kafkaesque paranoia, philosophical themes and Warren Beatty’s performance in the title role turned the film into a cult classic. Penn and Surgal ignored the usual conventions of narrative for a freewheeling approach to their dramatic devices and Chicago locations. The film’s soundtrack, reverberating with hints of everything from Béla Bartók to bossa nova, re-teamed Stan Getz with arranger Eddie Sauter, following their classic album Focus. 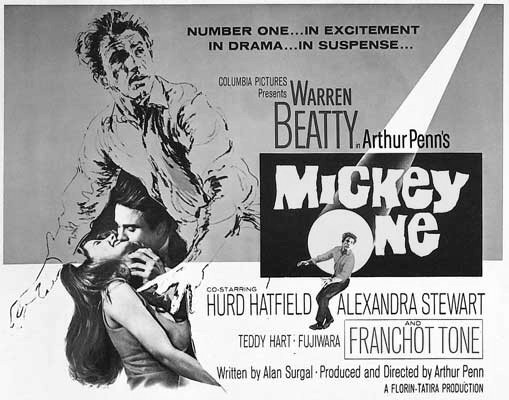 After incurring the wrath of the Mafia, a stand-up comic (Warren Beatty) flees Detroit for Chicago, taking the name Mickey One. Eventually he returns to the stage, but is wary of becoming successful, afraid that he will attract too much attention. When he gets a booking at the upscale club Xanadu, he finds that his first rehearsal has become a special “audition” for an unseen man with a gruff voice. Paranoid that the mob has found him, Mickey runs away. He decides to find out who “owns” him and square himself with the mob, but he doesn’t know what he did to anger them or what his debt is. Searching for a mobster who will talk to him, he gets beaten up by a bunch of nightclub doormen. Mickey finally concludes that it’s impossible to get away and be safe, so he pulls himself together and does his act anyway. In traveling about the city, Mickey continually sees a mute mime-like character known only as The Artist (Kamatari Fujiwara). The Artist eventually unleashes his Rube Goldberg-like creation, a deliberately self-destructive machine called “Yes,” an hommage to the sculptor Jean Tinguely. From Wikipedia, the free encyclopedia.

Often described as a French New Wave film made in Hollywood, Arthur Penn’s 1965 art movie enters the unsettlingly paranoid world of a nightclub comic on the run from the Mob. Having fooled around with the wrong blonde and gambled himself into an unpayable debt, an entertainer (Warren Beatty) flees to Chicago, where he hides out and changes his name to Mickey One. He hooks up with Jenny (Alexandra Stewart) and Castle (Hurd Hatfield), the owner of the nightclub Xanadu, but he cannot shake the paralyzing conviction that he’s being pursued no matter where he is. After being beaten by unknown assailants, Mickey finally decides that escape is impossible, so he might as well just do his thing.