Masha’s father supported his daughter’s musical ambitions. When the family lived in Latvia, he was lead guitarist in the band of Latvian superstar Laima Vaikule. He helped his daughter put together a demo of cover tunes that landed her a management deal. She was soon hanging out in recording studios and honing her sound. “I had a double life that I hid from my friends. As soon as my classes were over, I’d take the bus into New York City and work on my music until late in the morning. They wanted to know why I didn’t want to hang at the football games, but I was driven by the music.” Masha’s power and passion attracted the attention of songwriter Claude Kelly (Kelly Clarkson, Bruno Mars, Jessie J, Whitney Houston) and producer Nathan Chapman (Taylor Swift, The Band Perry, Shania Twain) – an unlikely creative pairing of two of the most successful and respected creatives in pop music. But after meeting Masha – the epitome of a Gemini – you’ll understand it. “My style is dirty and grungy and full of contradictions. I like angry, crazy rockers, happy country songs and folk ballads, anything with real emotion. They liked my outside the box thinking and we started writing together.”
Masha – Kids

She now divides her time between her home base in New York and legendary Blackbird Studio in Nashville. It’s in Nashville where the collective creative power of Masha, Claude, and Nathan yielded the music that will first be heard on her debut EP, set for release in May 2013. For the last year, Masha has been working relentlessly on her career. The covers she’s posted of her favorite women singers on her YouTube channel have gotten over two million views – and thousands of passionate comments from listeners who are moved by Masha’s voice and lyrics. With comments like “Masha’s voice is what my emotions sound like” – it’s clear that the Masha movement is just beginning. Masha’s flexible, expressive vocals leave an indelible impression on every thing she sings. She really is a singer’s singer. “Ugly” is a tough, aggressive rocker with a grinding guitar attack to match Masha’s raw, heated vocal. She goes from a whisper to a scream as she sings, “I only feel ugly with you.” Gospel and country come together on “Amen,” a prayer for unity, love and equal rights. Acoustic guitar and Masha’s vocal open a track that slowly builds to a full choir; Masha testifies with a soulful fervor, filling her vocal with melisma drenched grace notes. The verve, confidence and energy of her vocals compliment the muscular backing tracks and herald the arrival of a sharp, fierce new talent. 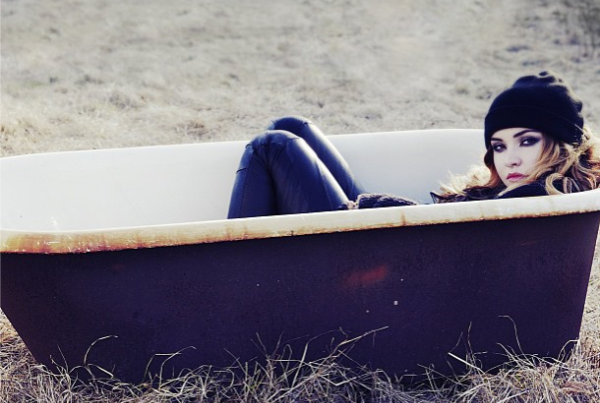