Hailing from the cultural and creative melting pot that is England’s capital city, Mangoseed comprise four musicians of Trinidadian, Jamaican, Australian and Irish descent. Perhaps no surprise, then, that this multinational troupe produce an enthralling fusion of global sounds, mashing up ska and soca, jungle and funk, rock and punk, all of it high-energy and unfailingly danceable. Originally formed by vocalist Nicholai La Barrie and guitarist Karlos Coleman, Mangoseed became a fully functioning act via the additions of Richard Hardy on bass and Sam Campbell on drums, configuring a pulsating punky-reggae repertoire that was captured on their self-released 2014 album, ‘Basquiat’, which earned impossible-to-really-nail-down comparisons ranging from Bad Brains to Massive Attack. What’s not up for debate, though, is the thrilling energy of Mangoseed’s live performances, as demonstrated by the band shining on bills alongside Alabama Three and Manu Chao, in addition to regularly delighting a loyal fanbase around and beyond their Brixton homes. 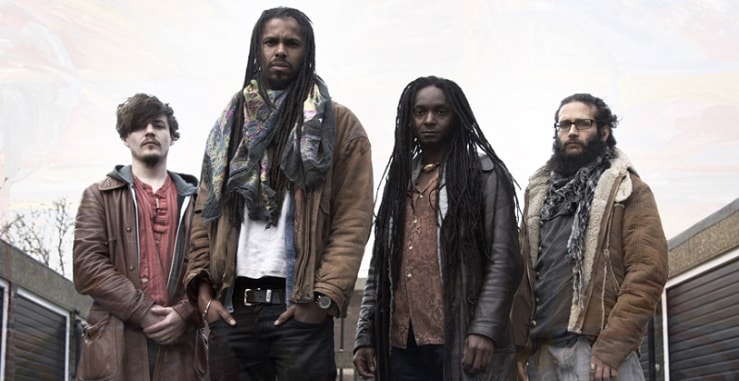 Their live shows have only increased in intensity in 2016 since the enthusiastically received release of ‘Lucy’, a blast of voluptuous urban-jungle skank that represented the first in a series of singles recorded this year. That a roster of prime summer gigs awaits, including a ground-breaking tour of Egypt, is evidence of Mangoseed’s irresistible growth into a worldwide musical force.

“Jah Jah guide and protect I/Please take me home”. A tribute to such roots reggae giants as Burning Spear and Third World, ‘Jah Jah’ is underpinned by classy, heavy-duty dub, marching ever onward in a convoy of growling bass, strident kick-drum, pealing guitar runs and galaxial effects. A fiery exaltation as relevant to the displaced of today as much as yesteryear, it is tale of a people traversing the desert in search of sanctuary, hoping that the wisdom of their God and forefathers will guide them to a safer land and a better life. It is an ode passionately delivered by Mangoseed frontman Nicholai, who directs the song to a ferocious climax with his increasingly quickfire patter, a rhythmic torrent culminating in praise to “to the older ones of creation”.