It started with a want ad, plastered across the board of a post-industrial space near Brooklyn’s infamously filthy Gowanus Canal. The request? Quite simple: “Robert Smith / Emily Haines, where are you?” The sort of thing you’d expect from a Metric fan who, as a kid growing up in New Mexico, fell under the spell of the Cure’s often bleak, yet always beguiling music at a time when riff-raking guitar heroes were all the rage. “People would say, ‘Why would you want to play like Robert Smith?,’” explains Lightouts founder Gavin Rhodes, last heard in one-man band Honeypower. “‘Wouldn’t you rather learn how to shred instead?” No, not really. Better to become the backbone of a fuzz-toned band in the mold of the Jesus and Mary Chain with vocals that recall David Bowie’s most spirited moments. Enter Greg Nelson, the only sane person to answer Rhodes’ call. Nelson was exactly what Lightouts needed: A seasoned natural at toeing the line between darkness and light. For proof of the man’s formidable vocal chops, listen no further than to his sensual croon and sky-scraping wail on the verses and choruses of “See Clear,” the band’s sledgehammering debut single from 2011. Fast-forward through the release of four ensuing singles — each a brilliant, hook-laden monster — plus dozens of live shows, press adulation from the likes of The Village Voice, SPIN, and Magnet, and the recruitment of an airtight rhythm section in the form of Dean Perry (bass) and Josh Fleischmann (drums). What began as an instrument-swapping duo is now a full-on power quartet, a development that’s set the stage for the March 2013 release of Lightouts’ first LP, Want.

A loosely linked concept album based around the idea of following forward-moving instincts while trying to keep certain desires in check, Want features a 13-track lineup that draws liberally from Lightouts’ catalog of short-form releases to include all the band’s singles and accompanying B-sides to date. Three new cuts bookend and bisect Want, including the sucker-punch title tune that arrives ten tracks in. Rhodes calls it “the most collaboratively written song on the album, in contrast to me writing most of the other tracks, apart from the vocals.” Why the wait for Lightouts’ first full-length release? “This was always our plan,” says Rhodes. “We wanted our debut album to come after we’d established ourselves as a band that made music worth listening to.”
There’s little doubt Want is a clear thoroughbred in 2013′s best debut album horse race, and Rhodes, Nelson, and Perry are justifiably proud of their two years of work. They’re also less than shy about paying homage to their strongest influences, buried in melodic distortion as they may be. For sonic proof, seek out the band’s singles for phenomenally reverent updates of deep cuts by the Stone Roses, the La’s, Guided By Voices, the Cure (of course), and not least of all, a devastating mash-up of LCD Soundsystem’s “All I Want” and Bowie’s “Heroes.” Rhodes elaborates: “While we’ve been compared to everyone from the Hold Steady to Surfer Blood, it’s no secret that many of our touchstones are acts from the early ’90s.” “I like bands who sound like Animal Collective and Yeasayer,” admits Nelson. “But we’re not part of the new primitive movement, you know? We’re after something tighter and more structured.”

Lightouts – The Big Picture Lyrics:
White light so easily arranged
Too sights they are looking for the same thing.
You say you really want it
Do you really really want it?
Look into my eyes then you know
I’ll know the truth
Our hearts in chains, spells will break
Now you know these hearts can’t change.

They say you are looking for some truth
What are was silly thing to do?
Now you say you really want it
Do you really really want it?
Look into my eyes then you know
I’ll know the truth.
Our hearts in chains, spells will break
Now you know these hearts can’t change. 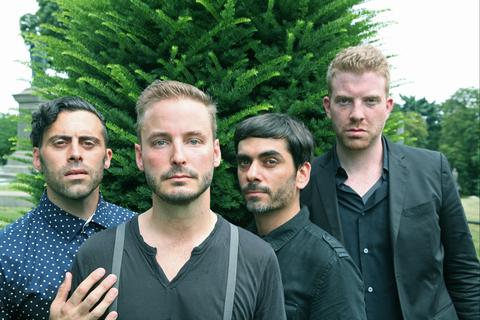