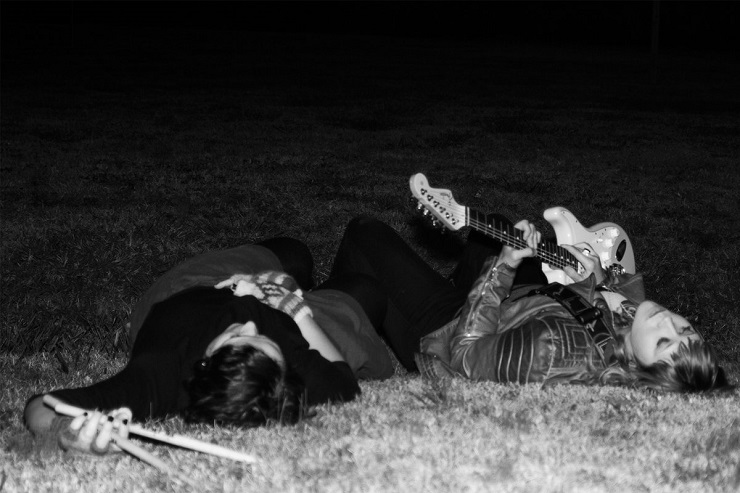 Ladyshark are a 2-piece, stripped-back, rock duo using guitar loops, FX, vocals and drums. Sarah is on guitar/guitar loops/lead vocals and Jane is on drums/back up vocals.

Ladyshark were formerly Anu Sava. Anu Sava started out as a solo project from Sarah Vardy, front woman of Australian rock band Girl With Cake. Anu Sava has grown into a 2 piece with Sarah Vardy on vocals/guitar and award-winning percussionist Jane Boxall on drums.

The first album BURIED was released in August 2013, which was a solo exploration into EDM crossed with folk music. The second experiment the ‘Lickety Split’ EP, delved into the queer-country genre and was unleashed in 2014.  http://ladysharkband.com/

Video clip for Ladyshark’s ‘Set Yourself Free‘ from the album ‘Monsters’. Edited by Megan ‘Raygun’ Dillard at Amityville Records.

This song was written about the detrimental relationship church and state can have. Prejudice based on archaic belief systems that serve to isolate people can often have negative connotations. This track was the first single release of the album ‘Monsters’ by Ladyshark. There’s also a video clip for the song at vimeo.com/193829253 created by Megan ‘Raygun’ Dillard.

Ladyshark – Set Yourself Free Lyrics:
Your thoughts are driftwood, vacuous and dim
Your judgment is lightening in your hymns
You keep feeding this façade from within
Your shame and guilt; in the grips of sin

Attached to the dead man hanging from the wall
Lamb of mercy, lamb of god I’m sure that I will fall
Great expectations keep growing up so tall
Hurtling straight to hell when my faith grows small

You cast insults and judgement from your stage
Don’t you think it’s time to turn a new page?
Hate doesn’t make you sexy
I am not being defensive