In an era where unexpected elements and expectations for talent is higher than ever, one duo shines above the competition to provide a unique experience like no other. Step into the arena of KOLAJ, the musical synergy of singer/songwriter Teesa and producer Mighty Mike. Their signature productions have polished organic tones, soaring guitar leads, and electronic inspired rhythms. Although they are embraced by the electronic music world for their productions, they set themselves apart by being a full live band. Guitar pedals, drum kit, live keyboards, as Teesa’s soft vocals and mesmerizing melodies take over the stage. Teesa is not your average artist. Teesa’s musicianship quickly captured the ears of top musicians like Dr. Luke (Katy Perry, Avril Lavigne, Britney Spears). With a burning passion to develop her talents, Teesa quietly observed and absorbed the production wisdom of Dr. Luke and Max Martin (Taylor Swift, Maroon 5, Pink, Katy Perry) which can be seen in her songwriting and pop-hook capabilities today. With her early roots established in the rock world, Teesa quickly landed writing sessions with Incubus guitarist Michael Einziger who had influenced her early guitar playing. What was meant to be an assignment from Einziger led to the birth of a KOLAJ song. This new direction would later intrigue Randy Jackson, who took Teesa in to further hone her abilities as a songwriter. With her songwriting abilities and instincts honed and having created her unique guitar sound, Teesa was destined for a unique path in the live music world. 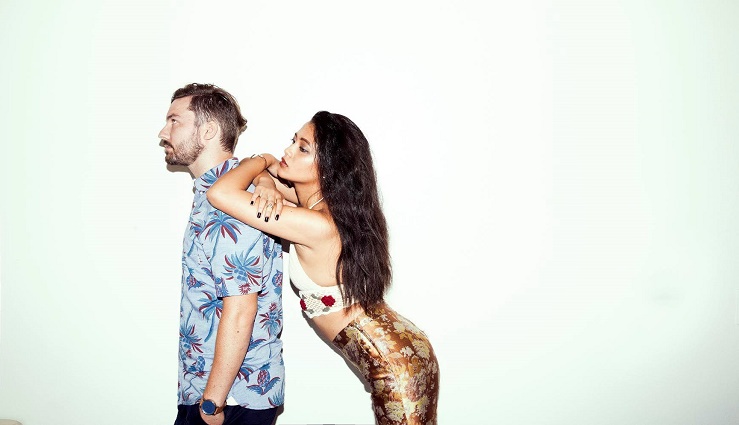 While Teesa brought the soul of KOLAJ, Mighty Mike built the foundation and led it to have an electric and radio-driven sound. Mighty Mike began as a drummer and had a love for Eastern music, and used his experience in both to bring a more international sound to his productions. He began his career while working alongside Kool Kojack (Flo-Rida, Ke$ha, Nicki Minaj), learning about Pop production and songwriting with some of the industry’s best producers and writers. After being influenced by such heavyweights in the industry, he used his experience to explore numerous collaborations and projects. Mike’s songwriting credits are quite extensive; He has written and produced songs for radio and television that are currently circulating across the globe, covering more than 50 countries to date. His hard work has developed top 40 songs and projects, including Grammy-nominated country singer Kelly Clarkson and Carly Rae Jepson, with the latter having won Best Album of the Year in 2013. Mike’s musical mark gave him the opportunity to work and have co-productions with Will.I.Amand Josh Abraham, which stand as a testament to his unique production skills. With numerous achievements under his belt at already a young age, Mighty Mike is putting his skills to the test to raise the bar in the live music scene with KOLAJ’s sound.

Kolaj: The Touch Lyrics:
You take me so high that when I leap
Into your ocean, I dive in deep
So blow in my lungs to help me breathe
You always save me from underneath

You make me want you so much I get high
You have the Touch, just enough to get by

Our love is pure like your favorite drink
Always straight up and never weak
We never burn out the chemistry
So spark the lighter, inhale the dream

You make me want you so much I get high
You have the Touch, just enough to get by