Kali Uchis is a 22 year old singer/singerwriter who was born in Colombia but currently lives in Virginia. At age seven, she emigrated with her family to Alexandria, Virginia. Uchis writes and produces most of her own music. She was introduced to music at a young age when raised in the Alexandria school system, culminating in graduating T. C. Williams High School, and played the saxophone and piano as a teenager. She experimented with song and video editing in high school at T. C. Williams, and released her debut mixtape, Drunken Babble, on August 1, 2012. The self-produced mixtape was described as “genre-defying” and was noted for its influences from doo-wop, reggae, and early-2000s R&B. Uchis collaborated with Snoop Dogg on the song “On Edge”, from his 2014 mixtape That’s My Work 3. In February 2015, released her first studio project, the extended play Por Vida, for free on her website. Por Vida features production from Diplo, Tyler, the Creator, Kaytranada, and BadBadNotGood. Wikipedia®. 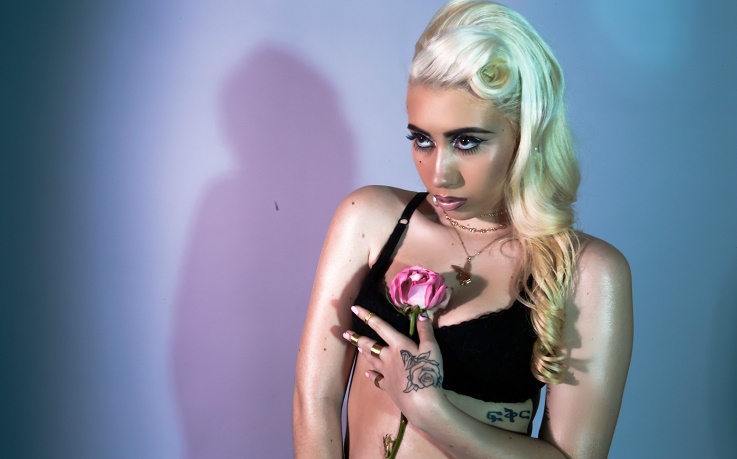 Even when she’s singing in her best baby voice, Kali Uchis has her middle finger raised. “What you waiting for?” she taunts sweetly in “Ridin Round,” a standout from her new EP, Por Vida. The vocalist, a Colombia native reared in the D.C. suburbs, has been perfecting the art of the kiss-off track since high school. Now, she’s nailed it with an askew beat from Bunx and words that smile while they aim for a place where, unlike her new residence of L.A., the sun rarely shines.

I don’t gotta hide, no, I don’t got reason to lie
I don’t need your drama, I don’t need you to survive
You don’t gotta say it cause I know that you don’t like me
You and all your friends can open wide, go on and bite me
I know I’m some shit and I’m cool with it
You can’t tell me shit, don’t come and share your dialect
Ridin’ ’round your city like the cops now
Cause there’s no way that we’re gonna stop now

I know it sounds strange, but I used to count change
On the counter at the grocery store, the bags I would arrange
Now his face is looking kinda flustered
He didn’t know that I was my own hustler
Baby, understand, I don’t need a man
Fuck me over, I’ll fuck you worse then take off to Japan
Think that I couldn’t cross the street without holdin’ his hand
And that if he did his dirt he’d get off with a reprimand

Oh no, oh no, oh no, Oh my, oh my, oh my
Ridin’ ’round your city with the top down
Cause my passenger is pretty, we won’t stop now.