Songwriter/rapper/vocalist Justina has spent the last few years honing her skills and building up a strong internet presence with numerous music videos that have appeared on the home pages of top-rated social media platforms such as MTV2.com, Idolator.com, Aol.com, Allhiphop.com, PerezHilton.com, Sohh.com, HypeTrak.com, Worldstarhophop.com, Vladtv.com, Thisis50.com and many more. Her social media accolades include her “Get High” video which ranked #1 watched video for 3 weeks on Goodmusicallday.com, “Boom” which ranked #7 on DJBooth.net and her “Hard To The Body” video which was featured on Spike TV’s Top 100 YouTube Videos. Following her memorable performances on the Tilly Stage of the 2012 Vans Warped Tour, Justina found herself in heavy demand by various promoters, which led to her serving as an opening act for established artists such as Chris Webby, Shawnna and MGK. More recently she appeared on MTV’s RapFix Show with RCA recording artist Travis Porter & host Sway, where she introduced her latest music video for the blazing street single, “Hip Hop Joan Jett.” She was also a featured act on KarmaloopTV’s Freakathon alongside Travie McCoy & Bun B. Justina’s music showcases her eclectic, hip hop and soul-infused, edgy style, which she combines with her playful, pop sensibility and distinctive, signature raspy vocal tone. Her sound has been referred to as Amy Winehouse meets Gwen Stefani and Nicki Minaj, and she cites a diverse range of inspirations and influences including Lil Kim, Tupac, The Beatles, and most importantly her father, who is also a vocalist and accomplished musician. Justina’s original music has been featured on popular television shows such as the NBC Steven Spielberg directed hit Smash, VH1’s Mobwives, MTV’s True Life, Oxygen Network’s Running Russell Simmons, Logo tv’s A- List NY, and the CW11. She is also currently gearing up to begin production on a reality TV show that is being produced by Thinkfactory Media, whose credits include the iconic TV series’ Walker, Texas Ranger and Gene Simmons Family Jewels. Justina is currently in the studio working on her highly anticipated EP, Valentine, featuring production from multi-platinum producers Infamous, Shy Boogs and The Heatmakerz. She can also be seen in the 2013 online advertising campaign for Flud Watches and has been heavily involved in the marketing campaign for Conquer Ent., the music division of Shop.com, with whom she is also currently touring. For a taste of Justina’s artistic talents, check out her Route 80 mixtape, which boasts production by Shy Boogs Mr. Lee and Ryan & Smitty, and features her collaboration with platinum recording artist Maino. All this said, the best is yet to come. 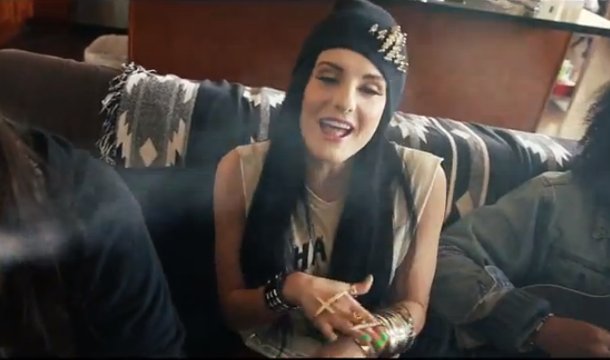