“Just Cause 2” is an action-adventure video game developed by Avalanche Studios, published by Eidos Interactive, and distributed by Square Enix. It is the sequel to the 2006 video game Just Cause. Just Cause 2 employs the Avalanche Engine 2.0, an updated version of the engine used in Just Cause. The game is set on the other side of the world from the original Just Cause, on the fictional island of Panau, which is located in Southeast Asia and covers 400 square miles of land. Rico Rodriguez returns as the protagonist, aiming to overthrow the evil dictator Pandak “Baby” Panay and confront his former mentor, Tom Sheldon. Wikipedia®. 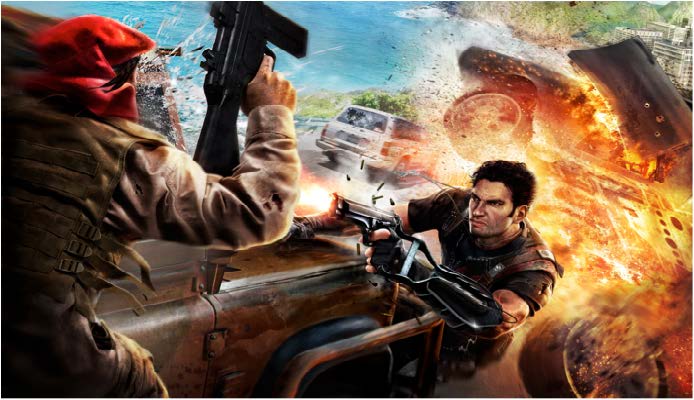 Rico Rodriguez is looking to start another revolution and he’s not using the usual diplomatic channels. This time it’s the fictional south pacific island of Panau that needs liberating, both from the dictator Baby Panay and Rico’s ex-boss Tom Sheldon. A mix of Grand Theft Auto and Mercenaries, once you’re parachuted onto Panau it’s up to you how you complete your mission or whether you just set off exploring. However you play your most important piece of equipment is the new dual-grappling hook, which lets you latch onto enemies and vehicles and then attach them to something else. Watching a soldier shoot into the air when you snag him onto a plane or pulling the wheels off a car when you tether it to the ground is just the start, as you learn to use your refolding parachute to slingshot yourself around the island. Political change has never been this much fun.

Just Cause 2 Trainer (+30) Options:
With the Just Cause 2 Trainer, you will be able to make use of the infinite health, infinite ammo, infinite grenades, no reload, infinite money, infinite weapon parts, infinite vehicle parts and other in-game cheats that will prove to be more than useful. This new trainer is for the v1.2 (v1.0.0.2) version of the game.