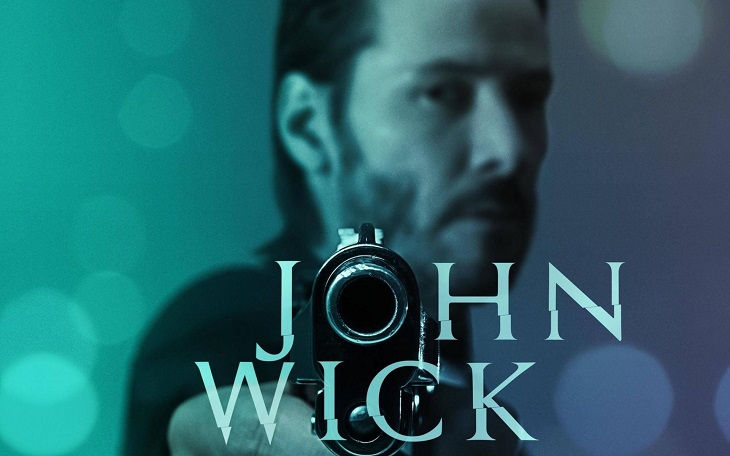 John Wick is a 2014 American action thriller film directed by Chad Stahelski and David Leitch. Starring Keanu Reeves, Michael Nyqvist, Alfie Allen, Adrianne Palicki, Bridget Moynahan, Dean Winters, Ian McShane, John Leguizamo, and Willem Dafoe, the film is centered on John Wick, a retired hitman seeking vengeance for the killing of his dog. Stahelski and Leitch, both of 87Eleven Productions, directed the film together as a team, though Leitch was uncredited. It was written by Derek Kolstad who completed the screenplay in 2012 and further developed it for Thunder Road Pictures. The film was produced by Basil Iwanyk of Thunder Road Pictures, Leitch, Eva Longoria and Michael Witherill. It marks Stahelski and Leitch’s directorial debut as a team after multiple separate credits as second unit directors and stunt coordinators. They previously worked with Reeves as stunt doubles on The Matrix trilogy.

Plot: John Wick, who just lost his wife Helen to an undisclosed illness, receives a gift from her posthumously in the form of a puppy named Daisy, along with a letter from her saying she arranged for him to have Daisy to help him cope with her demise. Initially indifferent to Daisy, he eventually connects to the puppy as they spend the day driving around in his vintage ’69 Mustang. He encounters a trio of Russian gang members at a gas station and their leader Iosef insists on buying his car, but John refuses to sell and makes a snide remark at Iosef before leaving. The three follow John to his home, break in at night, and attack John, who watches defenselessly as they kill Daisy before stealing his car. The following day, Iosef attempts to have the car modified by Aurelio, the owner of a chop shop who refuses to take it and hits Iosef when realizing who it belonged to and what Iosef did to steal it. John subsequently visits Aurelio, who tells him Iosef is the son of Viggo Tarasov, head of the Russian crime syndicate in New York and John’s former employer, before lending him another car. Aurelio, who works with Viggo, is forced to explain what happened to Viggo, who berates Iosef and explains who John Wick is: his best assassin, nicknamed Baba Yaga (or “the Boogeyman”), who retired after falling in love with a woman, had helped Viggo gain control of his syndicate by single-handedly eliminating all competition, a task he considered “impossible”.

Viggo, wanting to protect his son, attempts to talk John out of seeking retribution, to which John abruptly disregards, prompting Viggo to send a hit squad to John’s house to execute him, only for John to dispatch swiftly. Viggo then puts a $2 million bounty on John and first gives the offer to Marcus, a veteran assassin and John’s mentor, who begrudgingly accepts. John subsequently seeks refuge at the Continental, a hotel that exclusively caters to assassins, with the rule that no business can be conducted on premises. When Viggo learns of this, he doubles the bounty. John learns from Winston, the owner of the Continental, that Viggo has Iosef protected at his night club the Red Circle. John goes to the club and kills Iosef’s friend Victor before dispatching most of the security staff, but Iosef escapes after John is subdued by Viggo’s henchman Kirill. John escapes back to the Continental to treat his wounds before being attacked by Ms. Perkins, an assassin and former acquaintance of John’s who had taken the contract to kill him. John eventually subdues Perkins and forces her to reveal the location of Viggo’s cash stash before leaving her with a neighbor and friend Harry to await her punishment for breaking the hotel rules. Perkins eventually breaks free and kills Harry.

John goes to a church, which is a front for the cash stash, eliminates all the guards, and burns Viggo’s money, as well as various intelligence against the police and government officials that Viggo uses as leverage over the city. When Viggo arrives at the church, John ambushes them, eliminating more henchmen before being subdued by Kirill, who slams into John with an SUV. John is tied up and Viggo taunts him for causing trouble over a dog and thinking he could leave his old life behind. He leaves John to be tortured and killed by Kirill and another henchman, but Marcus, having chosen to protect John, kills the other henchman, allowing John to break free and kill Kirill. John then intercepts Viggo’s car and forces him to reveal Iosef’s location and pull the bounty, which Viggo begrudgingly does. John goes to the safe house where Iosef is hiding and kills all of the guards before killing a remorseless Iosef.

Perkins sees that John and Marcus have been in contact and tells Viggo, who has Marcus tortured and killed in his home over his betrayal. Viggo contacts John about Marcus’s death, luring John to his home where Perkins is waiting to ambush him. Before she can, she gets called to a secret meeting with Winston, who revokes her membership to the Continental for breaking the rules and has her executed. Winston calls John to inform him of a helicopter coming to the harbor to transport Viggo away. John races to the harbor and executes Viggo’s remaining henchmen before getting into a fistfight with Viggo on the dock. Viggo pulls out a knife on John and as they fight, stabs John in his already wounded abdomen. John is wounded, but is able to gain the upper hand by taking Viggo’s knife and stabbing him in the side of the neck. Viggo, mortally wounded, slumps over and dies, and John, wounded, but still able-bodied, stops to re-watch a video of him and his wife on his phone. After gaining strength, John ends up at a veterinary hospital to treat his wound before taking a pit-bull out from one of the cages for a walk on the boardwalk, where he had his last date with Helen. @Wikipedia