James Edge is already a studious musical maestro and a top drawer composer. The Kent-raised musician studied composition to master’s degree level under Joe Duddell – arranger for the likes of Elbow and New Order. After moving to London and starting to gig in 2006, he formed James Edge and the Mindstep to record 2010 debut album ‘In The Hills, The Cities’. The working relationships he built around this time would provide him with some dependable collaborators, including regular engineer and occasional co-producer Tom Aitkenhead, best known for his work with Laura Marling and Bloc Party. A core jazz-folk trio of Edge, double bassist Andy Waterworth and drummer Avvon Chambers materialised. Together the trio started recording second album ‘Machines He Made’ over a five day period tracking everything live and only overdubbing the backing vocals. 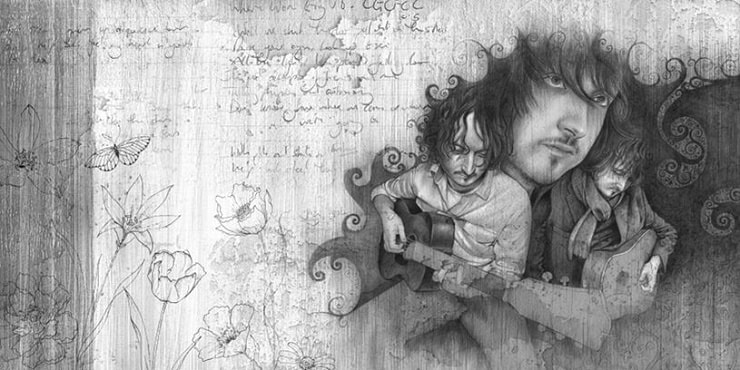 The songs were largely unrehearsed, with band members and additional session players mostly having not heard the pieces before. This spontaneous hodgepodge has resulted in some of the most whimsical and deeply experimental music to come out of the capital in a while. The eerie acoustics of Nick Drake inform the atmospherics of much of James’s songwriting, but his sheer compositional nous – which draws on aspects of jazz, modern classical music and punk rock and roll – elevates songs like ‘On A Red Horse’ and ‘Four Two Four’ to a place far above any glib and generic categorisation.

Order becomes disorder and harmony springs from chaos in ‘Four Two Four’. It sees Edge perverting the country shuffle into something darker and more abstract than anything you’ll find in the soporific musings of most commercial folk artists today. Once more James Edge and the Mindstep have crafted something of unquestionable beauty, something which challenges our stale notions of what folk music actually is. In the hands of Edge, it’s modern jazz. It’s punk rock.

This year has seen the praise surrounding Edge get more fervent. ‘Where We’re Going To’, released by Folkstock in February, has been played by Alex Lester on Radio 2 and Tom Robinson on 6Music., while ‘Becoming’, the flipside on that AA single release, was premiered and made song of the day on Folk Radio UK. The ‘On A Red Horse’ EP also received glowing reviews from R2 and Fresh On The Net amongst others. Any praise Edge gets is well given. He is a modern day Zappa, channelling his eccentric art through folk arrangements to create something deeply surprising, raw, and unnerving.