Ishani spent her childhood in the sprawling metropolis of Bangalore, India. After obtaining her degree in TV, Film and Radio in Singapore she moved to London to study Audio Engineering at Alchemea & Point Blank. Her first track ‘Pelican Elephant’ was picked up by MTV India. Ishani has performed at Sziget Festival and she’s also opened for the Icelandic electronic group ‘GusGus’ at Be My Lake Festival. Her second single ‘Don’t Stop the Fight’ was picked up by VH1 and included in the Indian interactive comic book Priya’s Mirror. Ishani is deeply influenced by artists such as Massive Attack, Portishead, Morcheeba and Hooverphonic. 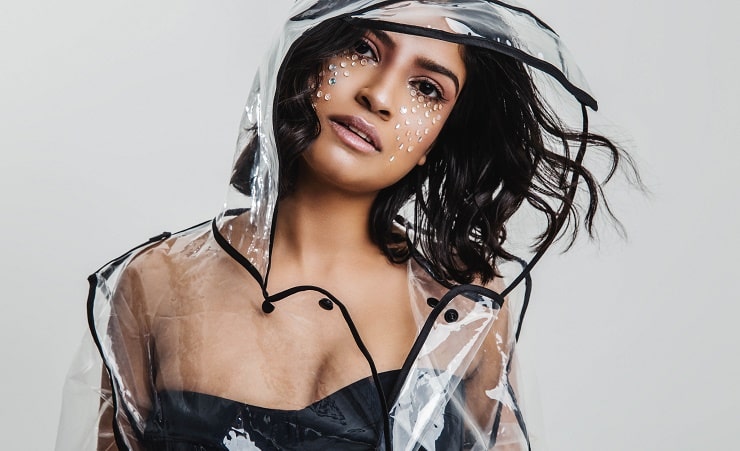 She has recently been made a BBC Introducing artist by Bobby Friction. Instantly recognisable by her distinctive vocals, and with incisive and often challenging lyricism, (‘Don’t Stop The Fight’ centres on the horrific social effects of rape), Ishani has already earned her dues as a serious and provocative recording artist. Her single ‘Insomnia’ centred on the anxiety that keeps us awake every night, and last release ‘Dark Angel’ is inspired by the loss of two of her friends to suicide, a loss too difficult for Ishani to discuss in detail. Together they, along with ‘Stormy Emotions’, teased her upcoming EP also titled ‘Stormy Emotions’, which is to be released later this year. Ishani hits the pop landscape as a serious artist committed to making both serious and widely appealing work. Her themes are culled from the darkness and the light in the world around her, and she weaves her razor sharp observations into pristine and addictive electro pop.

Dark and brooding, Ishani’s new single ‘Stormy Emotions’ is a genre-bending edifice of brutalist electro-pop experimentation. Evoking alt-pop artists like Santigold with the expansiveness of Lana Del Rey, the production lends the track a dark trip-hop/industrial vibe that chimes with its tempestuous subject matter. Its vast oceanic sound expresses the tumultuous depths of tragic love as Ishani’s natural lyricism conjures vivid and sublime images of limitless, horizon-chasing bodies of water. Framing her speaker as an ocean unto herself, Ishani’s ‘Stormy Emotions’ makes us examine the depths of our romantic feelings. Ultimately, like ‘Insomnia’ and ‘Dark Angel’ before it, ‘Stormy Emotions’ shows Ishani to be an artist not just on an expansive musical quest, but one that is also concerned with finding the psychological limits of our interior selves.