Born in Sainte-Félicité, where her parents owned a restaurant, Isabelle Boulay moved to the nearby city of Matane at the start of her adolescence, and studied literature at Cégep Limoilou. In 1988, her friends signed her up, without her knowledge, for a singing contest in Matane, where she made the acquaintance of Josélito Michaud, who later became her agent. In 1990, at the Petite-Vallée song festival, she won an award for her performance of “Les gens de mon pays” (Gilles Vigneault). The following year, in 1991, she won the Granby song festival for her rendition of “Amsterdam” (Jacques Brel) and “Naufrage” (Dan Bigras). She was also invited to take part in the festival Les FrancoFolies de Montréal. In 1992, she performed in France at Théâtre Dejazet, introducing Bill Deraime. In 1993, she represented Radio Canada at the “Truffe de Périgueux” festival held in Périgord, France, and was awarded the prize for Best Singer in the “chanson francophone” category. 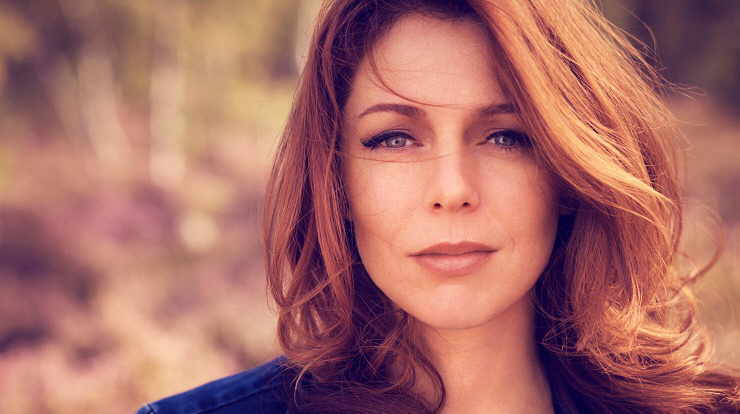 Following Boulay’s success in France, she was noticed by songwriter Luc Plamondon, who was looking for emerging talents to perform in a new production of his rock opera Starmania. There, Boulay portrayed the role of Marie-Jeanne from 1995 to 1998. She also provided the singing voice for Quebec singer Alys Robi in the TV miniseries of the same name, adding to her popularity in Quebec. In 1996, Boulay released her debut album, Fallait pas, written and produced by Daniel DeShaime.[5][4] She also participated again in Les FrancoFolies de Montréal.[4] She began recording her second album, États d’amour, in 1997; it was released in Quebec February 1998 and sold well, being certified as gold by September. The album was released in France in November. Since then, she has had considerable success both in Quebec and in Europe. Her biggest-selling album in France was the 2000 release Parle-moi. On 14 February 2008, she was presented with the medal of the National Assembly of Quebec by the mayor of her hometown, in recognition of her contribution to the arts. Wikipedia®.

Vannelli grew up in a family headed by his cabaret-singing father and a ‘keen-eared’ mother. Instinctively drawn to jazz, drummers in particular, such as Gene Krupa, Buddy Rich, Joe Morello, Ed Thigpen and Elvin Jones, as a child Vannelli studied drums and music theory for five years. Gino’s first foray into pop music came one afternoon as a group of young drummers stood in line, waiting to take turns to audition for a Montreal East group called the Cobras. The rite of passage involved playing a tune called “Wipeout” by the Ventures.

Having never heard the song before, Gino Vannelli made sure he waited to the very last, studying the parts every aspiring drummer played (or was trying to play) That afternoon, Gino came home a little later than usual from school, but as the official drummer for the Cobras. A year later, with his brother Joe holding down the keyboard chair, Vannelli headed up the Motown-influenced Jacksonville 5 (note, this is five years before the Jackson 5 recorded their first record). Along the way there were guitar and piano lessons. The urge to compose words and music followed not long after. At fourteen, Gino began his official singing career when the singer in the band fortuitously couldn’t make the high water mark in a then popular tune by a gritty Welshman, Tom Jones, called “It’s Not Unusual”.