INK first wowed the blogs at the end of 2012, teasing with a combination of intrigue & beautiful music. Comprised of two Londoners by way of Scotland and Liverpool in Colin Mac and Miriam Massie, INK released their debut single Ink Goes On to acclaim via Washington’s ATG records in the spring. The boy/girl duo are now set to release their second single Try What You Don’t Know on both sides of the Atlantic on INK Music on 11th Nov (UK) / 12th Nov (US). The single, an urban tale inspired by Romeo & Juliet, will be available on iTunes and all other digital outlets, and is another layered melodic gem of top-line hooks underpinned with lashings of punchy beats. It will feature B-side ‘Five Seconds’ – their kick-ass cover of the Twin Shadow track. Both songs have been produced by Grammy Award winner Dom Morley (of Amy Winehouse “Back To Black” fame). His nous adds to the band’s undeniable chemistry and represents another watershed moment in the slowly unraveling tale of these stylish tunesmiths. The enigmatic duo have once again collaborated with their visual partners for the single’s accompanying video in new talents Katia Kush and Kristine Kenmochi, who made a delightfully dark film for ‘Ink Goes On’ (Rabbit courts Fox, Fox eats Rabbit), and who have depicted the new single with the story of a mysterious INK yeti creature exploring and trying to find its place in our colourful urban world. Catch them live: Weds 4th Dec, The Waiting Room, London.

INK – Try What You Don’t Know 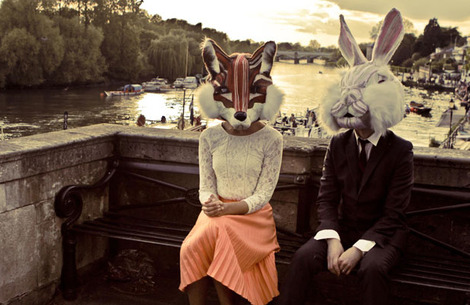