I, Frankenstein is an upcoming 2014 Australian-American fantasy action film written and directed by Stuart Beattie, based on the graphic novel and original screenplay by Kevin Grevioux. It stars Aaron Eckhart, Bill Nighy, Yvonne Strahovski, Miranda Otto, Socratis Otto, Jai Courtney and Kevin Grevioux. Kevin Grevioux of Underworld sold the original screenplay to Lakeshore Entertainment in 2010. It is based on his Darkstorm Studios graphic novel of the same name. Lakeshore, an independent Los Angeles production company which also produced the Underworld films, brought Stuart Beattie on board to re-write and direct in early 2011. In November 2011, it was confirmed that filming would take place in Melbourne and that Australia’s Hopscotch Features would co-produce the film with Lakeshore. Principal photography began on February 27, 2012, based at Docklands Studios Melbourne. Filming occurred in Victoria, Australia over a period of ten weeks, with multiple scenes being filmed at Ormond College. The film created over 500 jobs for cast and crew. It was announced on October 7, 2011 that Aaron Eckhart would play the lead role. Eckhart described his character thus: “Frankenstein is an intelligent, evolved man, and that’s how he is portrayed in this movie, for sure.” In November 2011, Yvonne Strahovski was cast as the female lead, a scientist working to reanimate the dead, while Miranda Otto was cast as the queen of the gargoyles. Bill Nighy plays the film’s villain, whom he described as a “Nasty piece of work; one of the angels descended with Satan.” Eckhart and Otto trained for three months with martial arts experts Ron Balicki and Diana Lee Inosanto in the Filipino martial art of Kali for their fight scenes. The North American release was set for February 22, 2013, but five months before then it was moved to September 13, 2013. In February 2013, it was announced the film would be released in 3D. In April 2013 the release date was moved again to January 24, 2014. On September 17, 2013, it was announced the film would be digitally re-mastered and released in the IMAX format. Wikipedia®.

200 years after his shocking creation, Dr. Frankenstein’s creature, Adam, still walks the earth. But when he finds himself in the middle of a war over the fate of humanity, Adam discovers he holds the key that could destroy humankind. From the co-writer of the hit supernatural saga, UNDERWORLD, comes the action thriller I, FRANKENSTEIN, written for the screen and directed by Stuart Beattie, screen story by Kevin Grevioux and Stuart Beattie, based on the Darkstorm Studios graphic novel “I, Frankenstein” created by Kevin Grevioux. The story is brought to life by a cast that includes Aaron Eckhart, Bill Nighy, Yvonne Strahovski, Miranda Otto, Jai Courtney, and Aden Young as Victor Frankenstein.

I, Frankenstein – “One of Its Kind” Clip 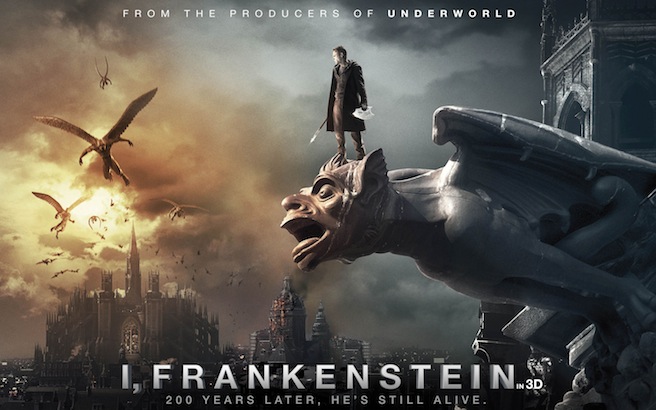