Holy Ghost! is an American synthpop duo from Brooklyn, New York City, consisting of Nick Millhiser and Alex Frankel. Millhiser and Frankel both grew up on the Upper West Side of New York City and attended elementary school together. They were later part of a hip hop group called Automato. Automato’s debut album was produced by James Murphy and Tim Goldsworthy of The DFA. After the release of the album, Automato “kind of fell apart”. However, Millhiser and Frankel kept working on music. Initially it was going to be more hip hop work, but decided to create music with vocals and poppier arrangements. The name Holy Ghost! was selected just before the pressing of their debut single “Hold On” in November 2007. The single was described by Resident Advisor as “one of the dirtiest little Italo tunes you’re likely to hear this year”. The duo continued to work on various remixes for the likes of Moby, Cut Copy and MGMT. Their second single, “I Will Come Back” was initially released in conjunction with Mountain Dew’s Green Label Sound record label. A video was made for the single that is a shot-for-shot remake of New Order’s “Confusion” video, including Arthur Baker reprising his role from the original. The song was later included on the “Static on the Wire” EP, released on the 18 May 2010. The duo also began to play live, starting with a tour with label mates LCD Soundsystem. Wikipedia®.

The “Bridge & Tunnel” single is released with a new video directed by the band’s long time collaborator Ben Fries. Remixes of the single will be out over a few different releases and formats, and will include work Prins Thomas, Midnight Magic, a/just/ed & Andre Bratten. New York & Norwegian disco come head to head thanks to DFA and all these amazing remixers. This is a very solid and exciting new release from Holy Ghost!, continuing an exciting past year which saw them play on both Kimmel & Letterman and this coming April where they will make their Coachella debut.

Hurt me til the music stops, until it’s 5 o’clock
I think I like it tell me what about you?
Play me like I’m on a disc.
Clutched in the DJ’s fist.
I think I like it, I don’t care if it’s true.

I think I’m home, where no one has the time.
I think I’m finally home, and I do the bridge and tunnel grind. 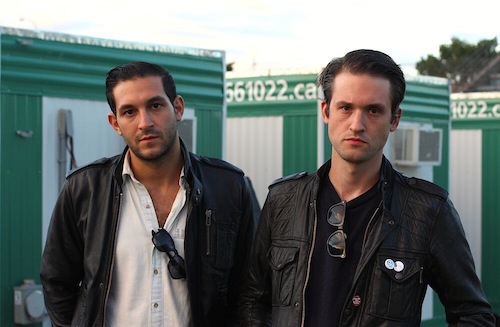