Viennese electro-pop quartet Hearts Hearts reveal the titular single ‘Goods / Gods’ from their forthcoming sophomore album on Tomlab Records, and announce a one-off London showcase at Thousand Island on 22nd May. Hearts Hearts explore emotional and moral ambiguities across the ‘Goods / Gods’ record, taking aim at the ineffectiveness of the dichotomies and borderlines that define modern society in the process. The eerie electronic soundscape is beautifully complemented by David Österle’s soft vocal delivery, the left-field pop production conjuring up a disjointed haven. 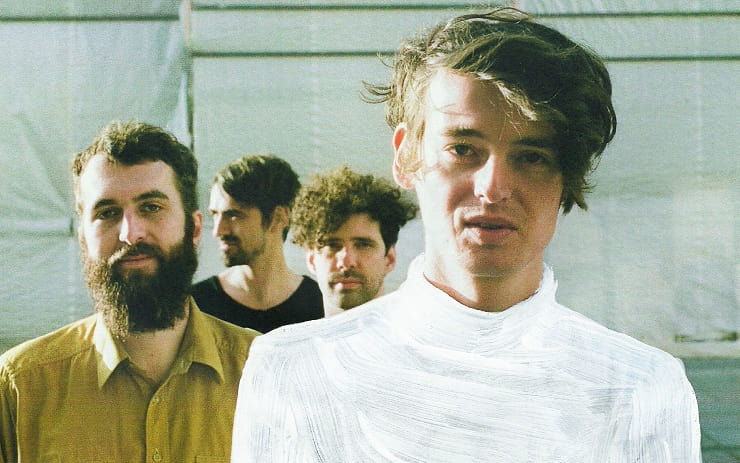 The track is also accompanied by a striking set of visuals, an artistic extension from their shuddering lead single ‘Phantom / Island’. David’s natural performance in front of the camera commands attention, his frame projected against a series of concrete monoliths and an expansive marbled mars scape.Österle offers some insight behind the creative process: “Mars has always been a place of yearning, satisfying both our desire to explore and colonise. It’s like a childhood dream, going somewhere where nobody else has been before, unrestricted by any natural limits. The mission to Mars reveals our generation’s drive for technological control and the fanatical faith in human progress.” Österle continues… “The video was shot near Paris in the Arènes de Picasso and Espaces d’Abraxas, two social housing projects which have previously served as filming locations for The Hunger Games. For us, the buildings are a visual representation of the tracks principal themes: social autocracy and creative agency.”

Arguably the most addictive high-energy track to be lifted from the LP, the group are found blending groovier verses with increasingly majestic choruses. Having already picked up support online from NPR, The Line of Best Fit, PopMatters Clash and Drowned In Sound, alongside radio plays from BBC Radio 1’s Huw Stephens and John Kennedy’s X-Posure Big One spotlight on Radio X the band look set to capitalise on this growing momentum. With the imminent release of their second studio album ‘Goods / Gods’ on 20th April, Hearts Hearts contrasting electronic elements and lush acoustic instrumentation is repeatedly proving its undeniable irresistibility.