Armin van Buuren and Hardwell have teamed up on a new collab titled “Off The Hook.” The new track, which debuted on Buuren’s A State Of Trance radio show, features a blending of the two producers styles, melding elements of trance and big room into a dance floor anthem. Armin van Buuren announced the new track on his radio show, stating that it was a merging of styles for both producers. “It was really awesome to work with someone who has a really clear idea about his own sound but is also open to merge his ideas with mine. I wanted to show the world that it can be exciting to try and blend two different worlds together and create something that’s more than the sum of its parts.” 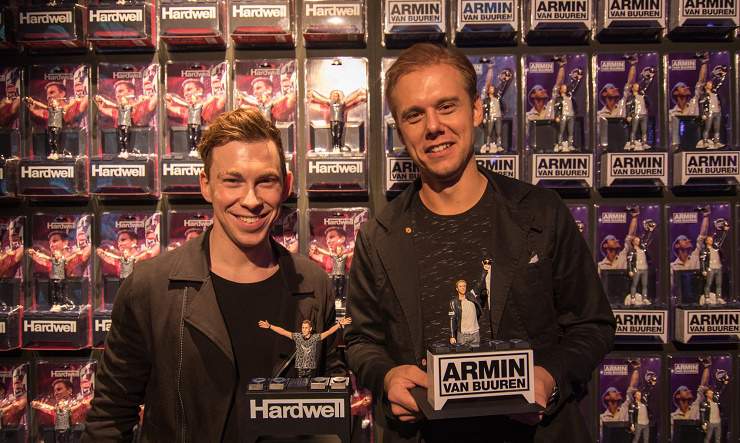 Launching their fresh, distinctive, and smashing joint venture into the world of cross-breed genres and boundary-defying collaborations, Armin van Buuren and Hardwell aim at completely obliterating the hottest clubs on the globe. The respectively former and current #1 DJs in the world allow for their bursts of creativity to define their team-up, resulting in an astounding dance floor thriller containing unmatched drive, impeccable chords, and pounding basslines.

It’s not often that two of the world’s biggest electronic dance music DJs and producers join forces on a club track capable of wreaking havoc whenever it’s blasted from high-powered, high-fidelity soundsystems. This is one of those rare instances. Today, GRAMMY® nominated artist, Armin van Buuren, and two-time DJ Magazine “#1 DJ,” Hardwell, release their new clubland collaboration, “Off The Hook” (Armind/Revealed).

Music maturity came swiftly for the now seasoned-veteran Robbert van de Corput, better known as Hardwell. At the age of 25, the young Dutch titan capped off a 10 year journey when he was crowned World’s #1 DJ in the 2013 DJ Mag Top 100 DJs Poll cementing his position as the electronic scenes newest superstar DJ and becoming the youngest ever winner of the coveted Top 100 DJs award. In 2014 the Dutch megastar did it again – being crowned World’s #1 DJ in the 2014 edition of DJ Mag’s Top 100 DJs Poll for a second consecutive year. Having already created a legacy that would put most of his counterparts to shame this award-winning DJ, producer, musician, label owner and lover of all things music has not only helped shape the current state of EDM, but has left an everlasting imprint on it.

With his dial fully set to musical creation, Hardwell’s 2014 was filled with large amounts of studio time as he poured numerous man-hours into his debut artist album – ‘United We Are’ – alongside continuing to circumnavigate the globe appearing at all the major festivals, countless arenas and exclusive club shows. Released January 23rd 2015, ‘United We Are’ – featuring the explosive first single ‘Sally’ with vocalist Harrison – also has a host of collaborations that include Jason Derulo, Fatman Scoop, W&W, Bright Lights, Jonathan Mendelsohn, Amba Shepherd, Joey Dale, Luciana Headhunterz, Chris Jones, Haris, Mr Probz, Funkerman feat. I-fan and DallasK, as well as a track together with Tiësto and singer-songwriter Andreas Moe.