Haley Small is an aspiring R&B-Pop singer/songwriter, anxiously striving to make her mark in the music industry. Anxiously striving to make her mark in the music industry, she has been writing, performing, collaborating, recording and doing anything and everything else to try and expand her horizons. Haley’s talent was first widely recognized when she sang the national anthems for a Blue Jay’s game at the Sky Dome at 10 years old. From then on, from ages 10 to 13, she continued to perform wherever she could to gain experience and continue to be recognized. Such places included Queen’s Park’s Jerk and Jazz Festival, the Living Arts Centre, and other charity events and talent showcases. At this time Haley was also being trained vocally and in piano. When she was 12 years old she began some studio work with Toronto’s well-known Jazz artist, Eddie Bullen, who acted as a musical mentor for her for many years as she got experience writing and recording music. At 14 years old, after continuing to train and work with people on and off stage, she started working with the Epydemix production team and 2012 Management Company on an album that would showcase Haley and the music they created at EMI Publishing Studio in Toronto with credible writers such as Toronto’s Kuya Productions. Through performing, writing and recording at such a young age, Haley has grown tremendously as a vocalist, writer, pianist, dancer, and has learned the importance of being a well-rounded artist. An R&B girl at heart, Haley’s main inspirations are Stevie Wonder, Alicia Keys, Lauryn Hill, Jennifer Hudson, Mariah Carey, Beyonce, Boys II Men, Rihanna, Neyo, Brandy, Christina Aguilera and Musiq Soulchild. Haley continues to collaborate, try new things, and learn from everything and everyone around her, with hopes to successfully one day share her music with the world. Although she has always considered herself a writer, recently Haley has turned her focus to refining her ability to write hit songs. Now, not only does she aspire to be an artist, but also an established writer. She has been working on artist placements with some of Toronto’s known producers and has developed a still growing portfolio of 27 professionally recorded songs in the past 4 months. Networking, writing, and continuing work diligently with the circle of musicians and industry participants that she has surrounded herself with to improve her career and herself as an artist, Haley and almost all of the people who have witnessed her talent and determination believe that she is destined for big success. Stay tuned for updates on her progress by following her facebook/youtube/ twitter and myspace activity.

Haley Small – Any time, Any place Lyrics:
In the thundering rain, you stare into my eyes
I can feel your hand movin’ up my thighs
Skirt around my waist, wall against my face
I can feel your lips

I don’t wanna stop just because
You feel so good inside, oh my love
I’m not gonna stop, no, no, no
I want you, all I wanna say is

Dancing on the floor, feelin’ the slow groove
My mind is starting to burn with forbidden thoughts
Strangers all around with the lights down low
I was thinking maybe we could, well you know

I don’t wanna stop just because
You feel so good inside of my love
I’m not gonna stop, no, no, no
I want you, all I wanna say is

Any time, baby. Any place. 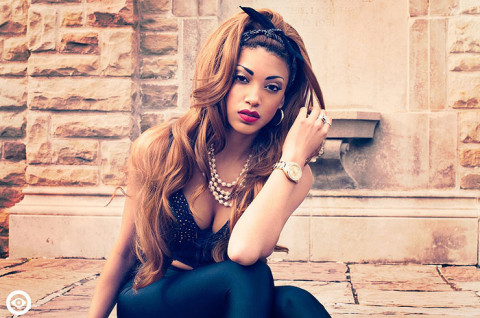