“Grand Theft Auto V“, commonly shortened to GTA V, is an open world action-adventure video game being developed by Rockstar North in the United Kingdom and published by Rockstar Games. The game will be the first major title in the Grand Theft Auto series since Grand Theft Auto IV (2008), and a continuation of the fictional universe that was introduced in that game. The 15th game in the series overall, GTA V is to be set in fictional Los Santos in the state of San Andreas and its surrounding areas, based on modern-day Los Angeles and Southern California. Renditions of San Andreas were previously featured in Grand Theft Auto: San Andreas, released in 2004, and the original Grand Theft Auto, released in 1997. According to Rockstar, “Grand Theft Auto V” is destined to be their biggest open world game to date. The game will concentrate on “the pursuit of the almighty dollar”. In a break with recent tradition, GTA V will feature three playable protagonists.

A highly anticipated game, GTA V is due for release on 17 September 2013, for the PlayStation 3 and the Xbox 360.Releases for the PC and Wii U are being considered by Rockstar, but have not been officially announced. From Wikipedia, the free encyclopedia

The newest trailer for “GTA V” features an extended look at the newest iteration of the open-world franchise. “Grand Theft Auto V” returns to the SoCal milieu of San Andreas, and features 3 different playable characters. The trailer demonstrates how you’ll switch between the characters, sometimes in the middle of a heist sequence. Also, you can play tennis now. The game looks a little bit like a cross between Michael Mann’s Heat and the LA scenes from Annie Hall, except with more planes.

The most radical departure from “Grand Theft Auto 4” will be a multi-character structure focused around three individuals – Michael, Trevor, and Franklin. Rockstar has said that players will be able to switch between the three at “nearly any time” and have already release a series of trailers setting the backstory for the trio. The new trailer gives more details of this system, showing how players can toggle between the three protagonists. 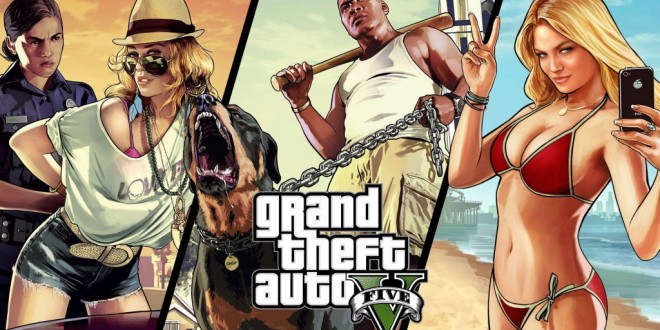