Ghostbusters is an action-adventure video game developed by FireForge Games and published by Activision. Taking place after the events of the 2016 film, the game features four-player cooperative gameplay where players control new Ghostbusters characters to defeat enemy ghosts. It released on July 12, 2016 for Microsoft Windows, PlayStation 4 and Xbox One. Ghostbusters is a licensed game by Activision released on July 12, 2016 as a tie-in for Ghostbusters (2016 Movie) but not entirely based on it. Unlike the movie, which features an all-female team, the video game features a team comprised of two females and two males. Based on the trailer, this game seems to have the same gameplay style as Ghostbusters: Sanctum of Slime, but with a similar visual style to Ghostbusters: The Video Game (Stylized Versions). This game is not to be confused with the 1984 game released by Activision that was developed by David Crane. Thrilling Multiplayer Experience: Play alongside your friends as the Ghostbusters in the 2-4 player local co-op campaign! Terrifying Ghost Trapping: Battle new and classic Ghostbusters characters, including Slimer, Gertrude Eldridge, Sparky and many more! Electrifying Weapon Choices: Dynamically swap weapons during battle with unique options for each character. Blockbuster Film Extension: An original story that takes place after the events of the movie! Ghostbusting fun for the whole family: Gamers of all ages and experience can dive right into the action. 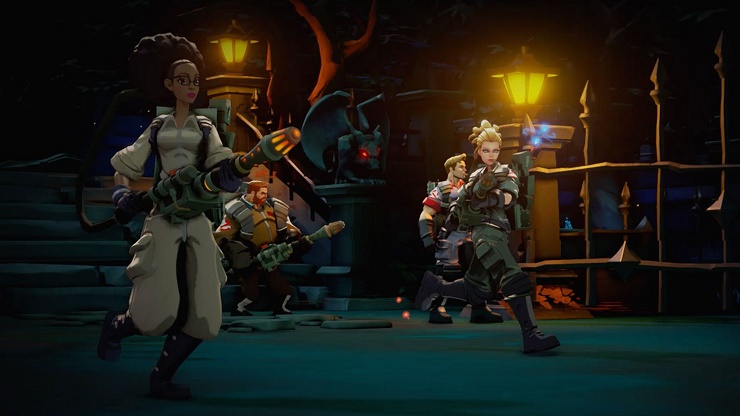