Welsh singer-songwriter and multi-instrumentalist Georgia Ruth has announced a new album Fossil Scale, due for release on October 7, 2016 via Navigator Records. The record is the follow up to 2013s Welsh Music Prize winning Week Of Pines – a feat Georgia never contemplated shed achieve for her critically acclaimed, bilingual debut album. The record prompted The Guardian to tip her as One of the British folk discoveries of the year, with Georgia going on to be twice nominated in the 2014 BBC Radio 2 Folk Awards, alongside radio support across Radio 1 and 6Music. UK live dates to support the release of Fossil Scale are expected to be announced shortly. Fossil Scale was written in Caernarfon, a town in North Wales defined by its space and tranquil landscape that Georgia, at the time, called home. The ancient surroundings of the town– its body of water and the neighbouring Snowdonia mountains – came to exert as strong a bearing on Fossil Scale as the hours of Beck, Radiohead and Bowie albums that tracked this writing period. Though it wasnt until Georgia stumbled upon a news article about a mysterious mutant-fish – with reptilian head & fossilised scales- discovered by Russian fishermen, that she began to quantify her own life in relation to her immutable surroundings. 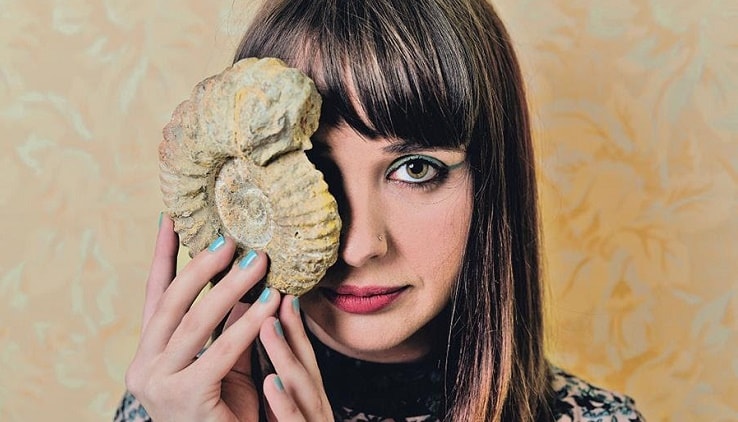 This fish became something of a representation of those constants, as Georgia began to explore the detachment from them that modern life had brought about. Switching out her previous go-to writing tool- the harp- for a piano in search of a more expansive yet ambient sound, Georgia headed into the familiar setting of Snowdonias Bryn Derwen Studio in January 2015, to lay down the foundations of what would become Fossil Scale. When the sale of the studio just 5 days into recording threw plans awry, recording time was then split between studios in London and Cardiff – in the case of the latter, at friends and collaborators Manic Street Preachers Faster Studios (Georgia sung on Divine Youth, a track that featured on the Manics Futurology album).

The album was finally pieced together in Mwnci Studios, co-produced with Italian producer Marta Salogni (Phil Selway, Eliot Sumner) and long-time collaborator David Wrench (Caribou, Bat For Lashes) some 11 months after those initial sessions began. During the year long period of recording, Georgia herself also relocated from Caernarfon to Cardiff- a move she considers pivotal to the albums development, enabling her to further explore themes of detachment as she moved and lived around the worlds quiet constants. The comparative clamour of city life prompted those songs written in the quiet of Caernarfon to shed skin and inhabit a different world, mirroring Georgias own move. Thus, Fossil Scale is a marked progression in song-writing and style, driven heavily by keys, synths, guitars and layered recorders, alongside an Indian stringed instrument called the sarangi.

The latter came about following an introduction to Hindustani classical music during time spent on The British Council’s ‘Folk Nations’ project in Kolkata, where Georgia met James Yorkston-collaborator Suhail Yusuf Khan, who fittingly went on to play the instrument on Fossil Scale. In particular, tracks like the brass-capped Good Milk and the albums playful title track bear the stunning effects of this augmented instrumentation and layering, marking an adept departure from the more traditional folk foundations of Grand Tour, and the songs which comprised Week of Pines. Georgia currently still finds time to present regularly for the BBCs Welsh-speaking radio arm BBC Cymru, where the selections during her 3 hour weekly programme champion not only the camaraderie felt between Welsh musicians, but the language itself. Its little surprise then, that Fossil Scale is imbued with both- Georgia dips into her native Welsh on a sparsely tender cover of Meic StevensSylvia, whilst school-friend Meilyr Jones sings on the title track, The Doldrums and When I Was Blue. Ultimately, whilst Fossil Scale is a homage to the worlds, and lifes inscrutable constants, it is more pertinently a snapshot which captures Georgia Ruth as a young artist in unmistakeable transition.