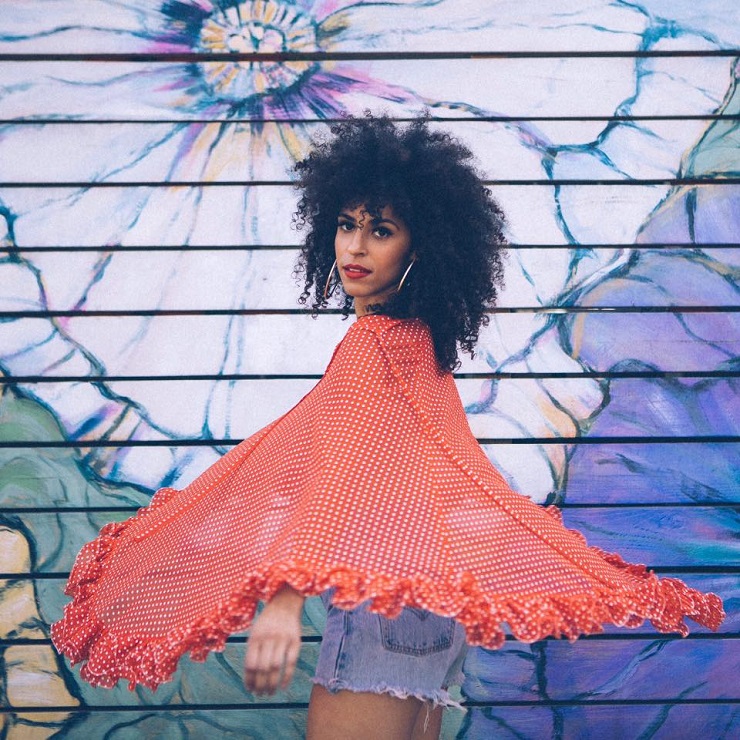 It’s impossible not to become infatuated with soulful pop princess Gavin Turek. The LA Native is always clad in a hand-made 70s fringe dress (designed herself in every color) and armed with the best dance moves you’ve ever seen. It’s easy to draw comparisons anywhere from Tina Turner to Beyoncé but really, Gavin is her own force to be reckoned with. Performing always came natural: she grew up with a father who played piano and tagging alongside her mother, who toured coffeeshops singing gospel. Her origin story goes like this: at age three, a teeny tiny Gavin interrupted her mother mid performance, took over the mic and to the astonishment of the audience, finished the song for her. She knew every single lyric, word for word, and whoa, that girl could sing. Suffice to say, a star was born.
Growing up, Gavin obsessively studied two things: music (the likes of Donna Summer, Prince, Lauryn Hill, Diana Ross. Michael Jackson, Giorgio Moroder) and all forms of dance. Originally aspiring to be a professional dancer, she spent months at a time in India and Africa, immersing herself in different cultures. Ghana was where Gavin first discovered her love for fringe and learned that the popular disco-era fad had much deeper origins. Everyday while in Ghana, Gavin learned and performed the traditional dances of the northern region, with falling in love with their massive fringe belts that moved with the music and drums as an extension of body and spirit. As Gavin jokingly told Nylon Magazine, “fringe really makes your hips look good and accentuates the movements.” Another great discovery for her was that in other cultures, dance is much more than a form entertainment, it is a way of life. It is used to celebrate births, weddings, religious worships, achievements and even deaths and afterlife. Upon returning to the United States, Gavin eventually returned to singing and songwriting as her main medium of expression, but when the time came to perform her own music, dance and fringe costumes naturally became a vital component for her live shows.
Two special artists in particular became champions early on for Gavin. Brainfeeder genius TOKiMONSTA has been a longtime friend and collaborator. Early on in both their careers, she asked Gavin to contribute vocals to her productions, which lead to the fan favorite track “Darkest Dim.” Mayer Hawthorne was next, not only inviting Gavin to open his sold out tours but recruiting her as the female counterpart in his retro funk act Tuxedo with producer Jake Uno. (You may recognize her as the golden disco goddess gracing the stage with them everywhere from the legendary Hollywood Bowl to Japan).
In 2015, word of mouth about Gavin’s music and electric live shows spread with the release of her electro R&B infused mini-album “You’re Invited” produced by TOKiMONSTA. The girl power duo followed the release with a sold out tour and received accolades from Billboard, NPR, The Fader, Apple / Beats 1, KCRW, etc. That year, Spin named Gavin as the summer’s Top Artist to Watch and her disco funk-tinged single “Don’t Fight It” as one of the best tracks of 2015.
By 2016, Gavin’s star quality was undeniable. She dominated the stage with guest performances at legendary festivals such as Outside Lands and Coachella and late night performances on Jimmy Kimmel with Mayer Hawthorne and Cee Lo. Her crowning achievement this past year began with the release of her single “On the Line” (produced by Chris Hartz of Passion Pit) last May. In support of the release, she played a beyond sold-out month long residency in Los Angeles. The long time venue promoter said he had never seen anything like it in LA, with lines wrapped around the block in hopes of catching Gavin perform what would soon become her new EP Good Look for You. “On the Line” premiered #1 on HypeMachine very organically thanks to dedicated love from the hippest underground blogs and airplay from six of KCRW’s top tastemakers. KCRW DJ Anne Lit proclaimed it the “song of the summer.”
Gavin preps now to release her EP “Good Look for You” February 17 via her own label Madame Gold Records. A self starter and entrepreneur whose mission is to inspire women of all ages and ethnicities, Madame Gold continues the tradition of female greats taking the reigns of their own success. Gavin considers it an homage to the artists she admires most: Solange, Jannelle Monae and TOKiMONSTA. The EP’s single “Good Look for You” (November, 2016) already has garnered attention from Stereogum, Nylon, Okayplayer, etc and the EP release will be celebrated with a live KCRW Morning Becomes Eclectic in-studio session and release parties in both Los Angeles and New York this February.
https://www.facebook.com/gavinturekofficial