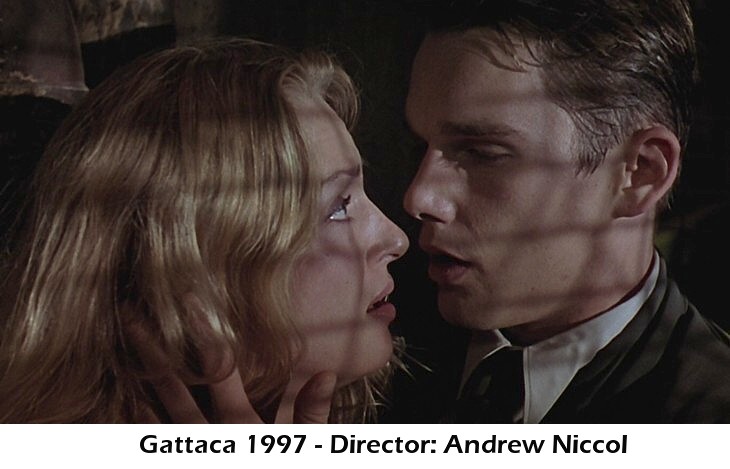 Gattaca is a 1997 American science fiction film written and directed by Andrew Niccol. It stars Ethan Hawke and Uma Thurman, with Jude Law, Loren Dean, Ernest Borgnine, Gore Vidal, and Alan Arkin appearing in supporting roles. The film presents a biopunk vision of a future society driven by eugenics where potential children are conceived through genetic manipulation to ensure they possess the best hereditary traits of their parents. The film centers on Vincent Freeman, played by Hawke, who was conceived outside the eugenics program and struggles to overcome genetic discrimination to realize his dream of traveling into space.

The movie draws on concerns over reproductive technologies which facilitate eugenics, and the possible consequences of such technological developments for society. It also explores the idea of destiny and the ways in which it can and does govern lives. Characters in Gattaca continually battle both with society and with themselves to find their place in the world and who they are destined to be according to their genes.

The film’s title is based on the first letters of guanine, adenine, thymine, and cytosine, the four nucleobases of DNA. It was a 1997 nominee for the Academy Award for Best Art Direction and the Golden Globe Award for Best Original Score.Wikipedia®

Plot: In the near future, where corporations screen their employees based on their genetic makeup, Vincent (Ethan Hawke), a man with a congenital heart condition tries to assume the identity of Jerome (Jude Law), a former athlete with perfect genes in order to fulfill his dream of traveling in space.